Amazon has today unveiled its new third-generation tablet called the Kindle Fire HDX. Like its predecessors, the device is available in 7-inch and 8.9-inch variants, and both feature speedy quad-core Snapdragon 800 processors, high-resolution displays, 2GB of RAM, and stereo speakers.

The larger model also offers an 8-megapixel rear-facing camera, which is a first for the Kindle Fire lineup.

In addition to the new models, Amazon has refreshed the Kindle Fire HD to add improved displays, faster processors, and Amazon’s latest software. The retail giant has also reduced the price of the 7-inch device to $139, while the 8.9-inch model is now just $269.

The new Kindle Fire HDX is a big improvement over its predecessor, and it gives the Kindle Fire family a better chance of competing with other affordable slates like the Google Nexus 7. Starting at $229, the 7-inch model offers a 1920×1200 display with 323 pixels-per-inch, as well as up to 11 hours of battery life during “mixed use,” and up to 17 hours of battery life while reading.

Amazon is also introducing a new feature with these devices called “Mayday button,” which “delivers revolutionary live tech support—one touch connects you to an Amazon expert who can guide you remotely through any feature—24×7, 365 days a year.” 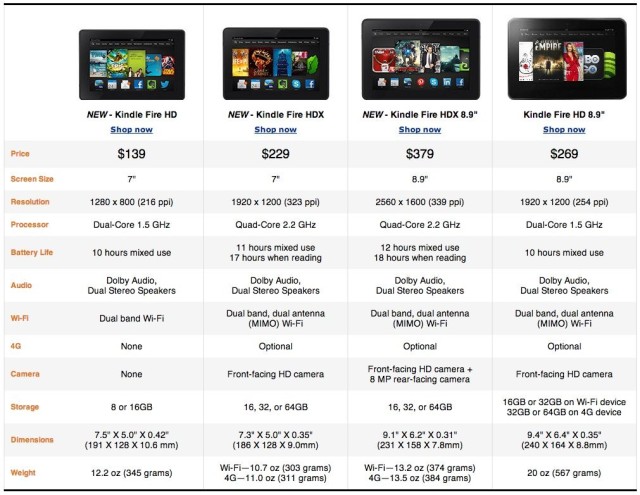