We really thought Apple’s A7 processor would be a quad-core chip, but it’s not — it’s so much more than that. It’s the world’s first smartphone processor with a desktop class 64-bit architecture, and it blows its predecessors out of the water.

It’s twice as fast as last year’s A6 chip, both in processing power and graphics, and when combined with iOS 7 — which is already optimized for 64-bit — it’s blazing fast. The iPhone 5 is certainly no slouch, but the iPhone 5s is noticeably quicker at lots of things.

Take the Camera app, for example — there’s no stutter or lag no matter what you’re doing. You can quickly switch between different modes, apply live filters, record 1080p video at 120 frames-per-second, and tap to focus and it’s all instant — even if you use HDR mode. And thanks to the A7 chip, we now have slow-motion video recording (there’s more on this in the Camera section of this review).

We won’t really get to appreciate the 64-bit A7 until third-party developers start taking advantage of it. Only the iPhone’s built-in apps do at this point, and they were already pretty snappy anyway. Give it a few months until your favorite apps and games have been optimized and you’ll really feel the benefit of it. 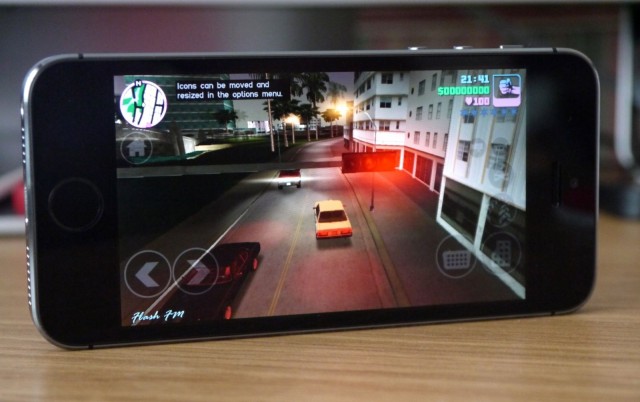 In GeekBench 3 tests, the iPhone 5s achieves a score of 2558, which is more than double the iPhone 5’s score. It’s also better than the 1408 points achieved by the latest iPad. When you compare it to its Android-powered rivals, the iPhone 5s beats the 2078 points scored by the Galaxy S4 with an eight-core Exynos 5 Octa chip, the 1799 points achieved by the Galaxy S4 with a quad-core Snapdragon 600 processor, and the 1718 points scored by the quad-core HTC One.

Benchmarks like these aren’t everything, of course, but they certainly count for something. A score of 2558 is pretty incredible for a smartphone, and it proves that even though the iPhone 5s doesn’t have a quad-core chip, it’s perfectly capable of outpacing its biggest and best rivals.

That’s already evident in new games like Infinity Blade III, which looks incredible on the iPhone 5s. Its developers are famous for pushing the boundaries and redefining what’s achievable on a mobile device, and the third and final installment in the Infinity Blade trilogy certainly continues that trend.

The game plays exceptionally well; it loads quickly, the transitions are smooth, and it plays without a stutter. And the visuals are on par with what you’d expect from a high-quality PlayStation 3 or Xbox 360 title. This really is console-quality stuff in the palm of your hand, and if you’re a gamer, you’re going to love it.

Call quality on the iPhone 5s has been just fine so far — exactly what you’d expect from a high-end smartphone. I’m yet to get a dropped call, and every conversation I’ve had so far has been loud and clear. Even in busy environments, the iPhone does a great job of blocking out background noise and making your caller easier to hear.

I wasn’t able to test the iPhone’s LTE connectivity, unfortunately — LTE networks are still pretty hard to come by where I’m based in the U.K. — but I’ve been impressed with the 3G speeds I’ve been getting so far.

Wi-Fi performance has been even better. I did several speed tests with the iPhone 5s and the Galaxy S4 — both one after the other in the same room, connected to the same server via the same Wi-Fi network — and every time the iPhone returned a lower ping and better download speeds. The Galaxy S4 did show better upload speeds, however. 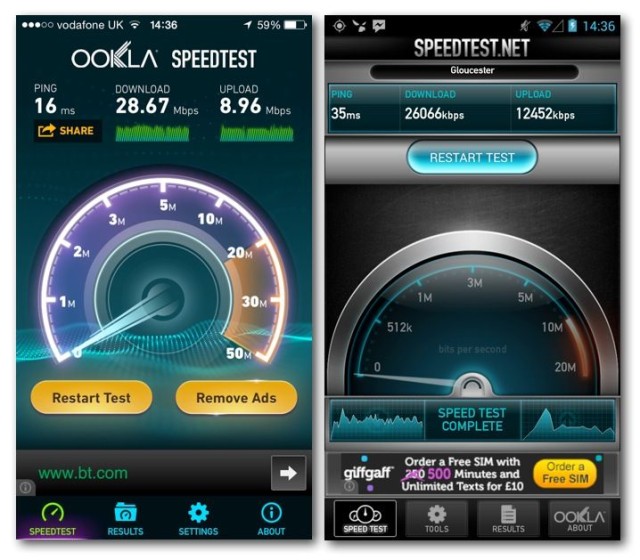