I’ve been playing with the 5s for about the last two hours, and I can’t remember the last time I was so stubbornly wrong about, gee, anything really — as much as I was wrong about the iPhone 5s. And not just the 5s, but also iOS 7, which I hated when I first launched it on my iPad last night; but man, is it ever beyond perfect on the 5s.

I know, my iPhone 5s and I have just begun our honeymoon phase, but here’s the first-impression verdict in a nutshell: The iOS 7 / iPhone 5s pairing is phenomenal. I’m so in love.

Feathery, gossamer lightness was the first, immediate impression I had when I first lifted the phone and clicked the power button. The 5s weighs the same as its predecessor; but to me, trading up from an old, beaten iPhone 4, the 5s felt weightless.

I’m also convinced the sensation wasn’t all hardware. iOS 7’s noisy, obnoxious, cartoonish interface slapped me in the face when I installed it on my iPad yesterday (I’d resisted playing around with the beta versions because I was convinced I’d hate the way it looked — and I was right). But shrink the icons a little, and the screen a lot, and presto — it’s amazing how that all that lurid brightness and color looks deliciously perfect on the iPhone 5s. Apple couldn’t have done a better job with the interface on the 5s.

Ah, but the hardware…here’s where I was positive the iPhone 5s would send me into bouts of frustrated swearing. Specifically I was apprehensive about the fingerprint sensor. But it’s an amazing little trick that follows Apple’s legendary credo of “it just works,” and it replaces having to key in a passcode. It takes about a minute per finger to get a solid lock. The setup procedure requires repeatedly placing and lifting your finger until the scanner has mapped it; if it sounds somewhat tedious, it really isn’t, and the fact that you can see progress as a digital whorl fills up actually makes it fun.

Once fingerprints are mapped, all it takes is placing a recognized fingertip in the home button indentation and clicking (it’s now deeper than on any previous iPhone) and the phone automatically unlocks. If it doesn’t sound like much, trust me — it’s really freaking cool. It can also be turned off so that security reverts back to the old passcode, or the whole passcode security thing can be turned off completely, just like with previous iPhones. 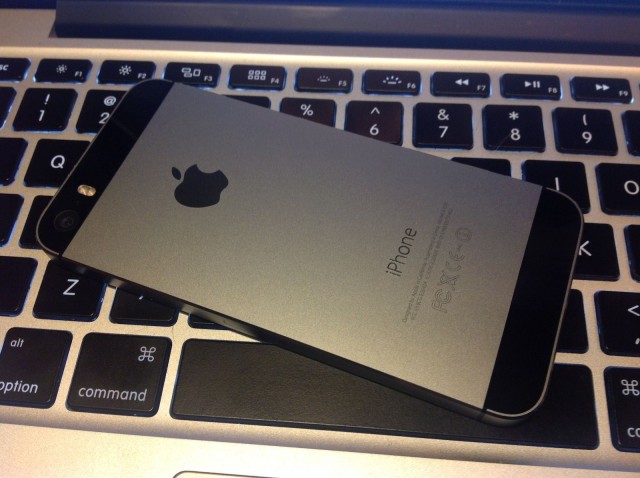 The new Space Grey color is elegantly understated (which, admittedly, some may interpret as “boring”).  It exactly matches cladding on the Macbooks, and it’s what I had hoped to walk out of the Apple Store with. And frankly, it may be the only iPhone 5s color anyone sees in the wild for a while, considering the gold and silver versions are almost rarer than the actual precious metals themselves.
And oh, joy, is the 5s one thunderingly fast device. The 5s packs a 64-bit A7 chip — the first 64-bit chip stuffed into a phone (imagine a Porsche 911 with a boat engine). The new chip obviously has much to do with the speed; but the device’s blazing responsiveness apparently is due to much more than a big brain — it’s just plain fast everywhere.

I’ll leave an in-depth look at the camera to one of my colleagues, but from the little I’ve experimented, taking photos is snappy, very simple to achieve and very pretty. The silvery new chimes are very pretty and a huge improvement over older iOS sounds or even anything I’ve heard on Android. There’s more, but the gist of my immediate gut reaction to the iPhone 5s is, well — wow. I really wasn’t thrilled about the idea of upgrading. Android phones have come a long way, and the 5s didn’t look like a significant advance — even from the iPhone 4s. But a cracked screen on my 4 a few days ago finally coerced me to take the plunge.

I’ve never been so happy to be wrong.