I’m really not a fan of trivia games. Any time someone drags out Trivial Pursuit at a party, I’m the first to come up with an excuse not to play. But You Don’t Know Jack was always different. It’s a trivia game with attitude, a sense of humor, and a weird bald mascot. What’s not to like?

The original game launched in 1995, and now it’s on iOS with a new title: You Don’t Know Jack Party. This is a new, live multiplayer version of the trivia game that lets you connect up to four different iOS devices to one Apple TV and play together in the same room on the big screen, via a secondary, free JackPad controller app.

Sure, there’s also a single player experience, but it won’t be as much fun. 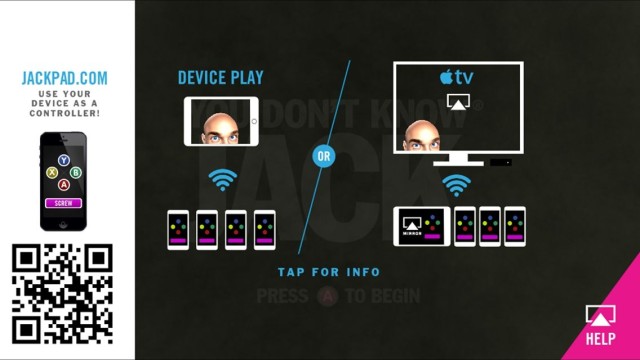 “You Don’t Know Jack Party blurs the lines between mobile and console gaming” said Mike Bilder of Jackbox Games in a press release. “This new app is our first of several planned releases that leverage mobile technology like Apple’s AirPlay to bring people together to play on whatever screen they choose.”

The game comes with a free trial episode, and you can then purchase any of the 30 additional episodes, which have 11 questions each, from within the app. These are the same core mechanics as the current Ouya version and 2011 console release of the game, including “Screw your Neighbor,” and “Wrong Answer of the Game,” so that’s pretty exciting.

The developer is looking to create more couch-and-play apps for iOS and other platforms in the future.

You Don’t Know Jack Party is available as a universal app in the iOS App Store right now for free.