It’s new iPhone announcement day! That customarily means a number of last-minute bombshells and leaks in the hours before the event, and this year is no exception: documentation for the new iPhone 5S has leaked out, giving us a closer look at the redesigned home button with fingerprint sensor… or, as Apple is calling it, the Touch ID sensor.

Steve at Nowherelse.fr has gotten his hands on what is purported to be the official illustrated guide to the iPhone 5S, and it gives us a good look at the new home button. 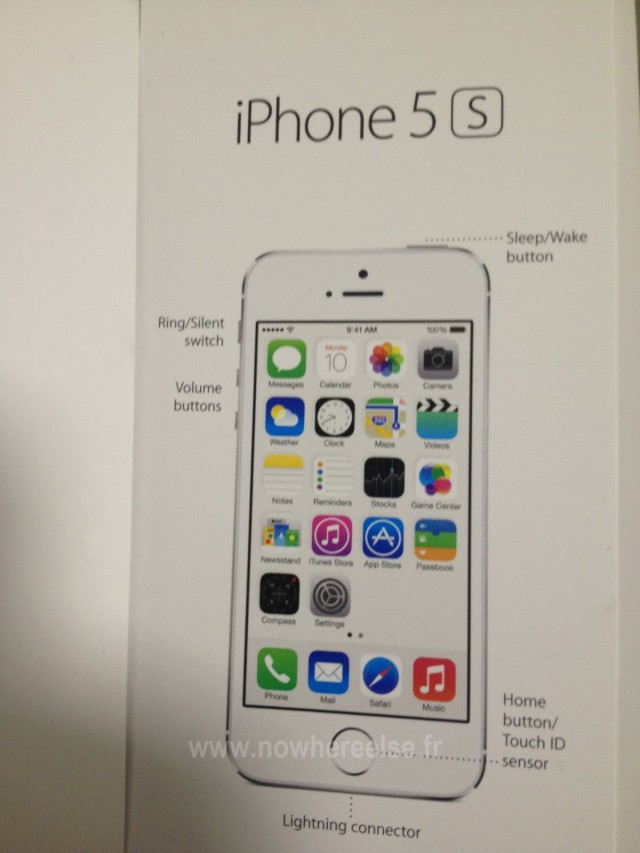 Differences? For one, it’s got a silver rim around the button, an iPhone-first. It doesn’t look bad, though. In addition, Apple is apparently calling this button the “Home button / Touch ID sensor” now. Up until now, we didn’t know what Apple was calling its particular interpretation of fingerprint identification technology. “Touch ID” sensor, though? It lacks Apple’s customary panache. Why not iTouch?

Also of interest in the iPhone 5S brochure is our first look at the official wallpaper for the iPhone 5S. It looks like Apple is doing the same thing they are doing with the iPhone 5C, and using the same color for the wallpaper as the device itself. To be honest, iOS 7 looks best with completely monochrome wallpapers, so we approve of the strategy.