Ever play Lemmings? If so, you know the thrill of guiding little figures through ever-increasingly hazardous environments, using each character’s unique skill to avoid and overcome the devious level designer’s clever traps and obstacles.

Wobbles, a new universal game app from developer Play Nimbus, takes its cue from Lemmings in two ways. One, players need to guide their wobbles from start to finish, as they all follow each other in unvarying obedience to the march. Two, the little sounds the Wobbles make come close to the cuteness of the sounds in Lemmings–when players fail a level, an adorable Wobble voice says, “wobble wobble wobble!” It’s adorable. Seriously. 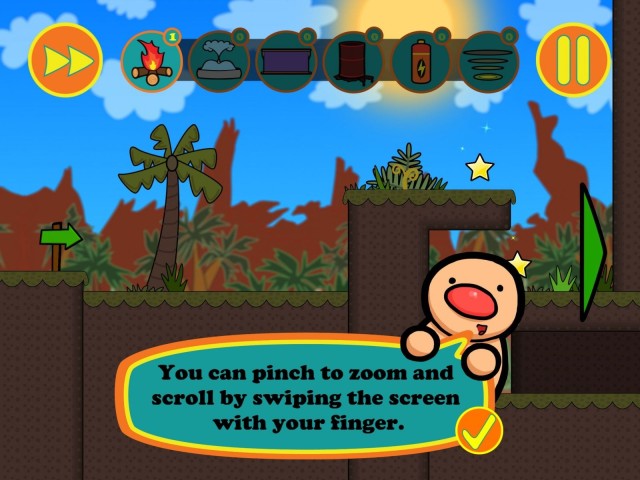 Where Wobbles diverges from the Lemmings formula is in the platforming objects that must be placed to keep the Wobbles from falling, bouncing into hazards, or drowning. The levels are arranged in groups of ten across six eras: Caveman, Roman, Medieval, Industrial, Modern, and Future. Each era introduces a new platforming object, like the campfire that allows caveman Wobbles to bounce up to high areas in the Caveman era, or the slippery oil in the Industrial era. Players swipe the objects down from a main dock-like area at the top, placing them within the environment at strategic spots. If all is placed correctly, the Wobbles make it from point A to point B with nary a death, collecting up to three stars per level.

Wobbles is an engaging, fun puzzle platformer that harkens back to Lemmings-style gameplay with charm and warmth.

The puzzle design is varied and does indeed make for engaging trial and error gameplay. There’s even a fast-forward button, which is essential when all the gadgets have been placed, and players want to get to the next level. Not that slow is bad, mind you, especially when the objects must be re-placed in various areas to keep the Wobbles walking and not dying.

The visual look of Wobbles is a bit on the simple side, with backgrounds and decorations feeling a bit like MS Paint. It’s not a problem, though, as the focus of the game is on solving the environmental puzzles. The music is fairly repetitive, and though there is a different style tune for each era, players will soon be turning it off. 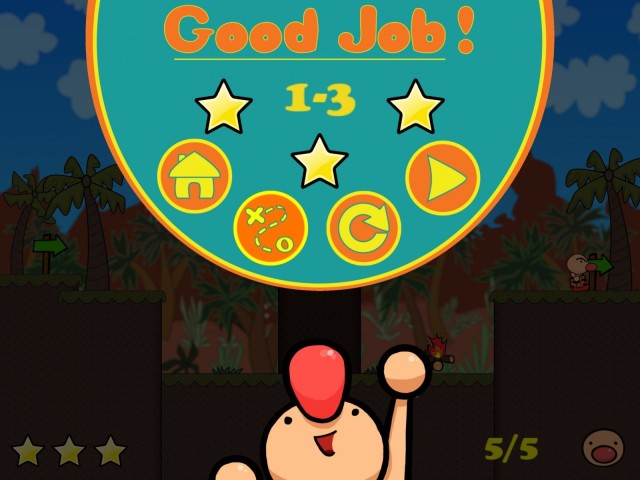 Occasionally, Wobbles will misinterpret a tap or drag. There’s also a slight unreality to the placement of objects. Putting campfires in the air makes sense in the gameplay, but left me feeling a bit disconnected from the in-game reality. In addition, playing Wobbles on the iPHone is an exercise in frustration, as many of the objects must be placed precisely. The small screen makes this pretty tough.

None of these issues are game-breakers, however. Wobbles is an engaging, fun puzzle-platformer that harkens back to Lemmings-style gameplay with charm and warmth.