With such a comprehensive leak now revealing the entire “lens camera” lineup in detail, it seems foolish to actually wait for an official launch to get all excited over the news of Sony’s totally left-field cellphone accessories. They’re actually standalone cameras, only the camera part is housed inside the lens, and they clip onto your smartphone, using it as the viewfinder and brain over a wireless connection. 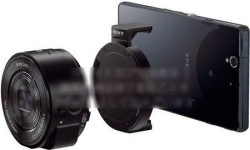 There look to be two models, the Sony DSC-QX10 and the Sony DSC-QX100 (the photos have blurred sections because they contained “inappropriate political messages”, according to Photo Rumors). These, as we have seen previously, will be lens-“only” version of the amazing RX100 and the WX150 cameras.

It seems that there will also be dedicated Sony phones available which will let you mount the lenses direct. Non-compatible smart phones will use an adapter which just (presumably) adds the sensor and lets you clip the whole unit to your phone.

In a curious way, the whole setup reminds me of Sony’s NEX range, with it’s tiny, almost vestigial bodies tacked onto the back of serious lenses.

The smart money says that these new gadgets will be released later today or tomorrow, which will give me an excuse to write about them again, hopefully with more details of the iOS app.

Until then, head to Photo Rumors to see the full gallery.