Let’s be clear: I love tower defense games. I’ve been a fan since the first time I played Desktop Tower Defense on Kongregate, I fell hard for Gem Keeper and Fieldrunners, and I carry a torch for Kingdom Rush.

These are tough waters to compete in, especially with a free-to-play business model that needs to encourage players to spend real money to help fund the game itself. There’s a delicate balance in tower defense games, between too easy and too difficult.

Does Super Hippo Studios Limited’s Pirate Legends TD bring enough to the table, then, to stand next to these others?

The overall theme of the game is pirates, obviously, and the artwork, music, and voice over work all reinforce this concept in spades. The defense towers are whimsical, as are the creeping — or floating, to be exact — enemies the towers must defend against. 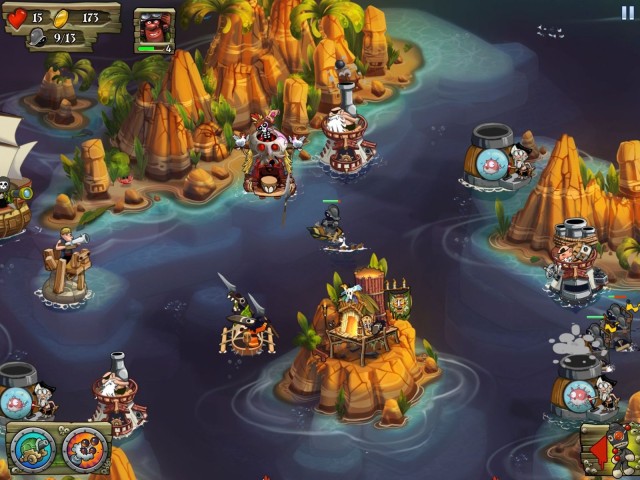 Gameplay is typical for the genre, with baddies coming through fixed paths and upgradable towers placed in specific locations (on buoys, in fact), each with its own strengths and weaknesses. The cannonball tower, for example, does a lot of area damage, but can be easily foiled by an enemy with armor. The voodoo-man tower, on the other hand, does well against armor, but little damage with each shot. Just getting the hang of which towers to place, how many, and where, is half the fun of most tower defense games, and Pirate Legends TD is no exception.

What Pirate Legends TD has, however, is a panoply of extra ways to defend the big pirate ship at the end of each maze. Some are persistent, including a cannonball barrage and a turtle with a cannon on its back (?!) that can be used, then recharge over time and used again. There are flying helper heroes that can be aimed at certain sectors of the map to add extra damage, one of which is free, while others will cost players some money as an in-app purchase. I appreciate the direct sale here, as the developers haven’t hidden the actual cost of such things behind a soft currency.

Interestingly, there is also a soft currency in Pirate Legends TD, the inexplicable “Toes.” These can be earned, or purchased, and are used to buy yet another defense mechanism, the boat-based helper characters, like a little tribal guy who floats in a circular path around the center of a map and throws spears at enemies as they pass. These characters last the whole map. 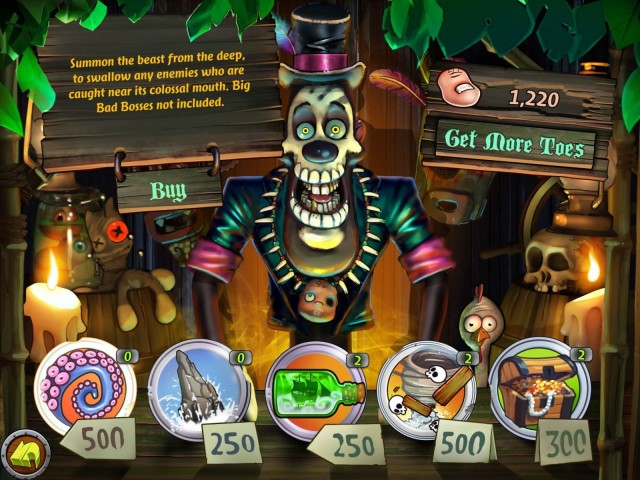 Finally, there are more devastating power-ups, like a Kraken, a wall of stone to keep bad guys back, and a spinning tornado that can be unleashed and controlled with a tilt of the iOS device to spin it’s damage around the paths of the map. Players get a few of these devastating attacks early on; the rest must be purchased with Toes.

The only complaint I have of the game is small, but significant: there needs to be a speed-up system, either doubling or even tripling the speed of the creeps as they move through the fixed paths. I spent a bit too much time multitasking with email and such while waiting for slower waves to paddle on by.

All in all, Pirate Legends TD provides players with enough challenge and enjoyment to merit a recommendation. Yes, it’s a free game, but my time is important; I don’t need to spend a lot of it with a bad game. There’s enough here to merit a download, and perhaps even to earn a spot on tower defense fans home screens for some time to come.