It was only a matter of time before somebody put a SIM card inside a camera. That camera is the Q, comes from Sweden and is – according to the pitch – “world’s first social camera.”

But is it too late?

I already have an awesome “social camera” with a SIM card inside: my iPhone. But I figure that the Q is aimed at the kind of folks (like me) who buy novelty cameras like the [Lomo Konstruktor](https://www.cultofmac.com/231885/lomography-konstruktor-the-plastic-camera-kit-you-make-yourself/ “Lomography Konstruktor, The Plastic Camera Kit You Make Yourself …”). It’ll be a 5MP compact with a 24mm ƒ2.4 manual-focus lens, plus a ubiquitous 3G connection. 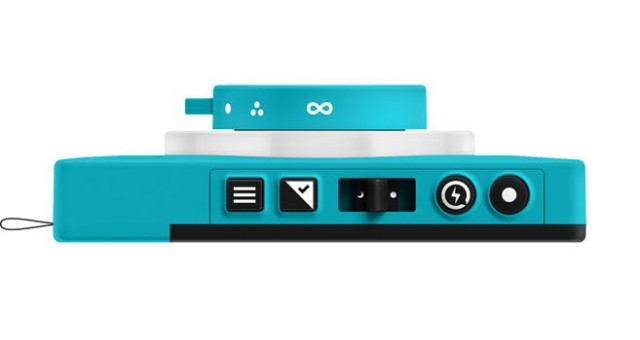 The camera comes with a membership of the Q Lab, which offers online storage. When out of 3G range, the camera buffers your photos in its 2GB internal storage.

But even that’s not enough to tempt me away from my iPhone. What does get me interested though are the extras. The Q is waterproof (to three feet) and shockproof, and has a built-in ring-flash. That’s right: now you can take flash pictures with a compact camera and they’ll look like a fashion shoot and not a hideous washed-out mess. And the flash gets its own shutter release: there’s one button for flash pictures, and one for regular pictures.

There’s more. The viewfinder is just a hole in the camera’s body, for ultra-fast framing even when the camera is off, and the flash doubles as an indicator for the eight-second self timer: the ring has eight sections and they blink off a second at a time. And of course there are built-in filters to enhance/ruin your pictures – nine of them.

Pictures are sent off immediately to Facebook, Twitter, Google+, Flickr or Tumblr, and can be organized online via a nice-looking web app. The device is available for pre-order now, and costs $199.

But you know what? This camera looks all kinds of awesome, and I’d buy one in a second… if it came with Wi-Fi instead of 3G. Who wants to sign up for yet another monthly account just to use another camera?