Gold Diggers is a new take on the endless runner theme, the vertical runner. In it, players are placed at the head of a three-car mining train that actually digs straight down into the earth, picking up gold nuggets and avoiding things like flaming platforms, giant sand worms, and the more run-of-the-mill rocks and walls.

Players move the endlessly descending drilling mine train back and forth across the screen by dragging a finger left or right along the bottom of the screen, where a virtual button sits. The action occurs primarily through avoiding obstacles and chasing down gold nuggets — which can be spent in the game’s store for upgrades and better equipment — as well as power ups that add extra time, distance, or guns to the front of the player’s mine train.

When the mine train hits an obstacle or enemy, it loses one of its three carts. When the final mine cart, the one with the drill on it, is hit, the run is over (not quite so endless, is it?), and the distance and gold nugget accumulation is tallied.

The conceit of digging down has been done before, most notably by Retro Dreamer’s delightful Duckers, which had a charm and visual wit that Gold Diggers doesn’t quite match. There’s a bit of a focus on acquiring gold, perhaps in the service of getting players to finally pony up some real cash in order to improve their distance and gold nugget scores at the end of each level.

That said, Gold Diggers does bring some quality to the table, in terms of control and visual design, and the ability to play the game for longer distances, coupled with the accumulation of gold nugget wealth across attempts makes the attempts to steer players toward in-game purchases a bit less intense. 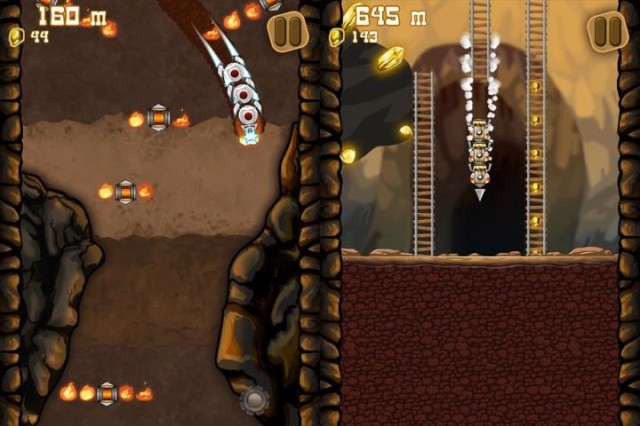 My time with the game was best spent on my iPhone 5 while waiting in line or when needing a quick fix of gaming fun. I didn’t enjoy Gold Diggers as much on either my iPad mini or iPad 3, as the extra screen real estate — a plus in most games — made things even more difficult as I needed to move my finger on the bottom of the screen farther than I did on the iPhone. The iPhone also allows for one-handed play, using a thumb to control the back and forth of the mine train; something more and more mobile games are becoming good at.

The difficulty spike here comes up fairly fast, though, as the mine cart rushes faster and faster as it eats away through the various levels of dirt. At a certain point, controlling the thing becomes a frustrating exercise in twitch gameplay, something that only the young and excessively talented will be able to master. While I do appreciate games that aren’t too easy, the difficulty ramps up much too quickly for me to enjoy too much.

Ultimately, if gamers can handle a bit of a grind to upgrade their mine carts and weaponry along the way, Gold Diggers becomes a decent little indie title that’s free to download and fun enough to play. While it doesn’t quite engage with players as much as other games do, it’s a solid attempt and worth a try.