The game is coming to iOS, Android, Mac, PC, and (what?) Blackberry fairly soon, so we thought it would be a good time to catch up with the Rubicon development team. We chatted with Paul Johnson, managing director and co-founder of Rubicon, about Combat Monsters. Here’s what he had to say.

“When we first started making Combat Monsters,” said Johnson, “the spec was very different indeed. At first it was more like the fight stages of something like Pokémon. But as soon as we had that running, making the monsters move around tactically became an obvious next step and this did indeed bring a lot more depth to the game.”

Then someone on the team suggested adding customizable card game mechanics to the digital battler.

“Instead of just getting your team of monsters handed to you,” Johnson said, “how about using deck construction and play the turns out like Magic (the Gathering)? That conversation lasted all of 10 seconds and then we ripped up the design doc, made a new development folder and pretty much started again, from scratch, that very day.”

Paul and the team are very excited about Combat Monsters.

“I’ve been a game developer for getting on 30 years now,” he said, “and I can honestly say that I’ve never believed in a project so deeply or so instantly ever before. All of us were gagging to make this new game, and the early prototyping stage was one of the most fun times I’ve ever had at work.” 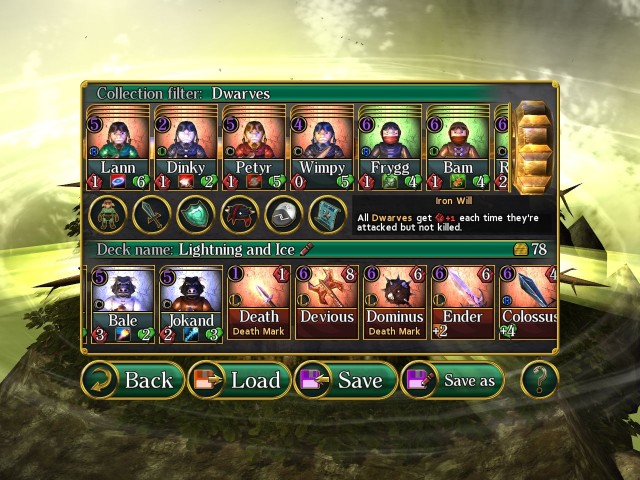 In Combat Monsters, players customize their battle decks in the usual way, picking monsters, weapons, equipment, spells, and power ups to battle other players who have done the same thing. Anyone who’s played a CCG before will get it. What’s different, however, is the battle itself.

“Instead of just casting a monster and saying ‘it does fireball for 3 damage, your turn,'” said Johnson, “you get to play a whole RPG-style battle. Each turn, you spawn monsters, attack, defend, and move everyone around the board. It’s important to secure bonus tiles because they can (and will) tilt the odds in your favor. You have to do all that knowing your opponents are trying to do the same to you, which makes things interesting.”

Combat Monsters allows multiplayer matches (both asynchronous and live) with up to six players, with private or public matchmaking assuring balanced matches. There are 132 unique monsters from 11 races and over 50 unique activated abilities. There are 70 individual weapons to collect, as well as 28 sets of armor, 42 battle spells, and 22 gameplay altering runes to keep things interesting.

While the success of Great Big War Game essentially funded this new effort, Johnson asks us not to compare the new game with the old. The Rubicon development team learned a lot about balancing multiplayer gameplay, as well as how to ease new players into things.

“Furthermore,” he said, “I look at it as a new level of refinement over our previous titles, easing in new players to the game and including top-notch multiplayer right out of the (metaphorical) box.”

Thanks to Paul Johnson for his time. Combat Monsters should arrive for iOS and other platforms soon; we’ll keep you updated when it does. Until then, here’s a short teaser trailer and some screenshots to whet your appetite.