I’m always interested to see a new iPad stand, and I’m especially interested if it can do the job of both my two favorite stands in one neat package. The stand is the Nimblstand, and it wants to replace the Origami keyboard case and stand, plus the PadPivot, or similar. 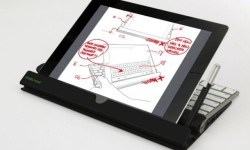 The Nimblstand slides under your Apple Bluetooth keyboard and fills up the space underneath, whilst clipping onto the cylindrical battery compartment. Along the back is a slot like you’ll find on many iPad keyboard cases, and this props up your iPad at a laptop-ian angle for typing. There’s also a slide-out fin/kickstand on the back to keep the whole lot from toppling backwards.

The second part of the design is hidden in the other side of the slot: you can reverse the iPad and slide it in the other way so that the keyboard is now underneath the iPad. You could remove the keyboard altogether, or you can leave it there, keeping your desk nice and tidy until you need it.

All this comes for $50, which is a little pricey considering you can pick up an Origami and a PadPivot (a.k.a. the best iPad stand ever) for just $60 combined. But it certainly solves a unique combination of problems, and might just be the perfect stand for you.

Number of comments on this postLeave a comment
Posted in: News Tagged: gadgets, iPad, stands