With this second release, Mikey Hooks, the team has again raised the bar for well designed levels, a whimsical art style, and a solid control scheme that works surprisingly well on the touch screen. Fans of the genre and newcomers alike will find plenty to love in this leveled speedrun platforming game.

With 24 levels in story mode, and 12 more in race mode, Mikey Hooks packs a ton of content in for the asking price. Players must race Mikey through each level, avoiding spiky pit traps, variously spiked robots, spinning ninja stars, and electricity while jumping across platforms and—of course—using his hook to swing across chasms of danger.

The controls are responsive and easy to use. The left thumb guides Mikey left and right with a virtual rocker switch. To change direction, players only need to slide their thumb left or right. The right thumb, then, manages two buttons, one to jump (a longer press means a higher jump) and one to slide under platforms and into certain robots. I rarely missed a button hit whether on my iPad mini or iPhone; the coloring and size of the buttons is a clear advantage to playing this game. 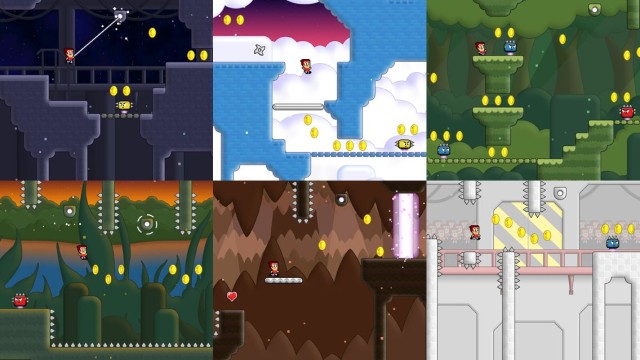 The music and graphical look here are reminiscent of the older 16-bit 2D Mario games, with bouncy retro beats and nostalgic coin sounds. The platforming is brilliantly designed and executed, forcing me to look just a bit ahead of Mikey as I slid, jumped, and hooked my way through the various environments.

There are scads of coins throughout each level, and Mikey can collect these along the way. The more coins gathered, the more money players will have to purchase disguises, which consist of different heads, eyes, faces, hats, and hooks. Players can build all sorts of wacky combinations, and then share their creations on Facebook or Twitter. It’s a delightfully fun experience, with some built-in social network promotion for the game. Brilliant, really. 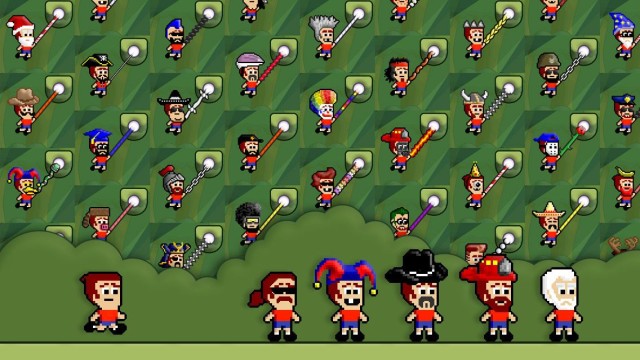 Mikey Hooks is primarily a speed game, as stars are earned for quick level completion. Race mode refines this even further, pitting Mikey against three evil ghost bots who race him to the end of each of the 12 levels. Beaver Tap Games plans on adding many more of these in future levels.

With this second release, Mikey Hooks, the team has again raised the bar with well-designed levels, a whimsical art style, and a solid control scheme that works surprisingly well on the touch screen.

Add Game Center achievements and iCloud sync, and Mikey Hooks is an almost perfect game. I honestly can’t think of anything to complain about. The presentation, warm goofy charm, and strikingly responsive controls make this game a slam dunk in terms of game design and just plain fun. There’s even a one-time in-app purchase to unlock four special power-ups that players can enable in the game to make things a little easier, including a coin doubler, a coin magnet, and extra hearts, plus a fun little retro graphics power-up that takes Mikey back to his roots.

All in all, Mikey Hooks is a must-play iOS game, bringing the best of class controls, alluring graphics and music, and diabolically enticing level design to the platform.