I’m on the verge of giving up on using my iPad as my main photo machine, but one brand new app is keeping me from switching back to the Mac. It’s called Photospector, it lets you organize and edit your pictures, and it’s pretty much the iPad photos app Apple should have made all along.

Photospector has two main features. Organizing and finding your photos by search, and image correction.

The first is the part that’s usually neglected on iOS, even in iPhoto. In Photospector you can see all your regular iOS albums and browse them as usual. You can also search across them based on keywords and tags, and then save these searches as smart folders which will update automatically. You can also view EXIF data right there as an overlay on the photo. 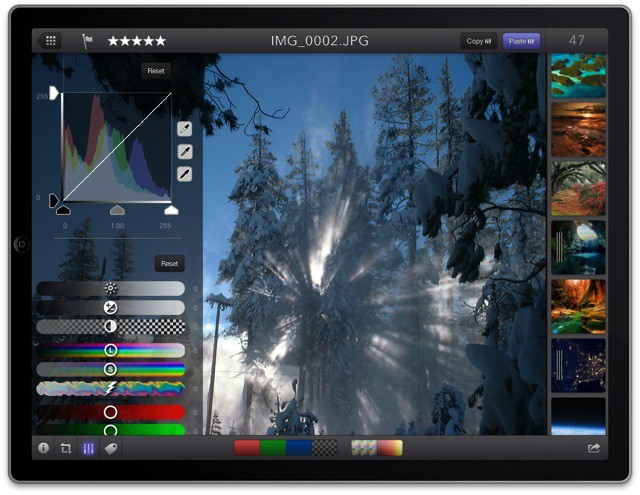 You can also tag your images with standard metadata keywords, and also rate them with stars, or flag them. The whole combined search/create/tag interface is a little confusing at first, but you soon get used to it. Most importantly, you can whip around the app at lightning speed without crashing it, which is often a big problem with photo apps on the iPad. The only thing I found slow (on the Pad mini, anyway) was image loading. I’m guessing this is because the app loads the entire picture ready to be zoomed right in way past 1:1.

Which brings us to image correction. Photospector is no Snapseed, nor does it want to be. The focus here is on corrections, letting you tweak the color balance, the tone curve and the usual contrast, brightness and saturations settings (and so on). You can also crop your pictures and even sample the black, white and gray points with an eye-dropper tool. You won’t be adding grungy tilt-shifts here, but you can quickly tweak your images to look their best.

And you really can do it quickly. A $2 in-app purchase (the app is free) lets you bulk-edit pictures, applying metadata to many images simultaneously, or copying image edits from one photo and applying them to several photos at once. And better still, it appears these edits are reversible, not baked in until you export a photo.

There are a few oddities, though. You can’t edit a search once you’ve created it. This is annoying if you get an empty smart folder because you misspelled a tag, say. And what the hell is going on with the faux iPad frame on these promo photos? It looks like an iPad mockup from late 2010.

And here’s one bonus tip. Find an album with a few similar photos and wait for a couple of them to get loaded. Now, with one image showing full screen, pull the little “grabby bar” on the thumbnail of another image in the sidebar. You can wipe between them, almost like peeling one picture up to show the one below. It’s a really great way to check on minute differences between images, and unique so far as I know.

I’ve called may apps “Lightroom for iPad” in the past, and I stand by all of them. But Photospector is the closest yet in that it works for organizing and editing. Like the first version of Lightroom, there’s enough here to work with, but I can see the potential for a truly great app in the future.