The iPad continues to dominate all other tablets in web usage in North America, according to the latest study from Chitika.

Apple’s iPad claimed 82.4% of North American tablet traffic in May, an overall share jump of 1.4% since January. Chitika breaks down the the current web traffic statistics as follows:

As can be seen on the graphs above, Apple’s iPad claimed 82.4% of North American tablet Web traffic, an overall share jump of 1.4% since January. Additionally, despite a month-to-month decline of 0.9% in overall share – users of Amazon’s Kindle Fire still generate the second most tablet Web traffic in North America, with a usage share of 6.5%. The Samsung Galaxy family of tablets claim third place, holding steady at 4.7% of U.S. tablet usage share. 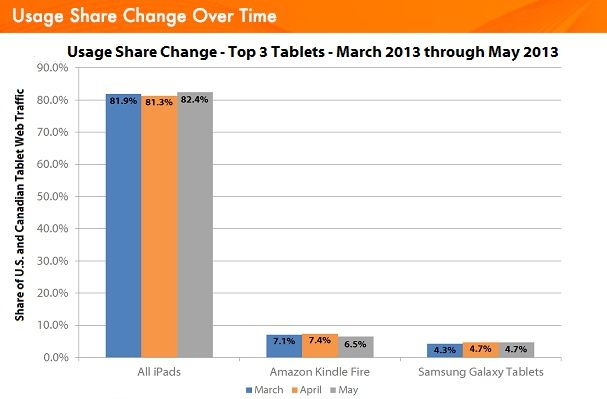 You can find the full report with even more graphs, over at Chitika.

Number of comments on this postLeave a comment
Posted in: News Tagged: chitika, iPad, Kindle