Apple has begun charting iOS adoption figures to help developers establish the percentage of users running different versions of iOS. Google has been doing the same thing for Android developers for some time, and Apple’s chart only highlights the massive difference in fragmentation between the two platforms.

For example, 93% of iOS users are running the latest iOS 6 release, while only 7% are using iOS 5 or earlier, according to the App Store data Apple measured during a 14-day period ending June 3, 2013.

In comparison, only 33% of Android users were running the latest Android 4.1/4.2 Jelly Bean release — which was released last summer before iOS 6 — during the same time. Another 25.6% of Android users were running the previous-generation Ice Cream Sandwich release, and a surprising 36.5% were still running Android 2.3-2.3.2 Gingerbread, which was first released in December 2010. 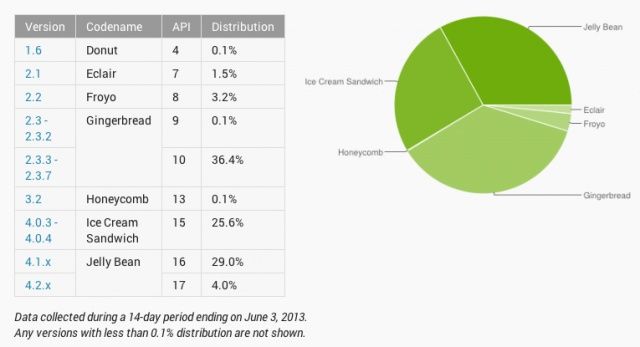 It’s also worth noting that Google’s figures only take into account devices that have access to Google Play. So those that use alternative platforms, such as the Amazon Kindle Fire tablets, which are also still running a heavily modified Gingerbread release, aren’t included.

Of course, this isn’t just about which platform has the fastest adoption rates; it has a significant impact on developers who must try to accommodate the most popular releases when building their apps. This is why so many Android titles aren’t compatible with older devices.

The reason for Android fragmentation is that so many smartphone manufacturers use Google’s platform on so many different devices, and they’re not very fast at rolling out the latest updates — or updating older devices. Because Apple is the only company using iOS, it’s the complete opposite.

In fact, when Apple released iOS 6 last fall, it took just one month for more than 60% of users to upgrade. The Cupertino company will be hoping it sees the same speedy uptake with iOS 7, which is scheduled for release later this year.