We were surprised that a new MacBook Pro wasn’t part of Apple’s Mac refreshes at WWDC earlier this month, but if new benchmark tests are anything to go by, it shouldn’t be too long before they’re made available. A new 13-inch model with the latest Intel “Haswell” processor has appeared in Geekbench tests showing slight performance gains over the current generation.

The new Mac Pro has been benchmarked ahead of its release, too.

The new MacBook Pro appeared on Geekbench yesterday with the “AAPLJ44,1” model number. It’s not clear whether this is a Retina MacBook Pro or an update to the older model, but both provide roughly the same performance when equipped with the same processor.

This machine was running OS X 10.9 Mavericks, which was unveiled at WWDC and is currently in beta testing with developers, and it packs 8GB of RAM and an Intel Core i5 4258U processor, clocked at 2.4GHz.

That’s the new Haswell processor that just got introduced to the MacBook Air, and according to the test results, it will bring performance improvements of 5-8% over the previous entry-level MacBook Pro. That doesn’t sound like a huge improvement, but you can be sure its impact on battery life will be bigger. 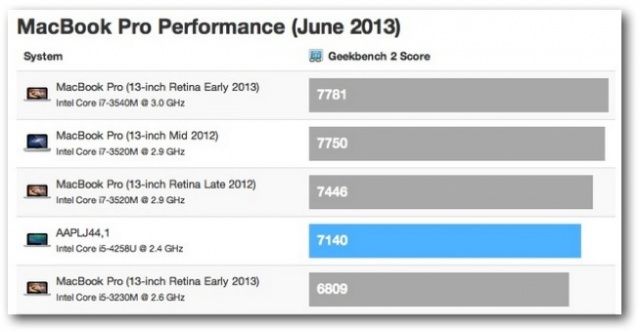 When you compare that to the 7 hours the previous-generation 13-inch MacBook Air offered, it’s a massive difference.

The fact that this machine is running Mavericks suggests it could get its unveiling alongside the launch of the new OS X update later this year. Recent reports have suggested that Apple will update the MacBook Pro alongside its iOS devices, and this indicates those rumors are accurate.

As for the new Mac Pro, that’s been appearing on Geekbench, too, with the “AAPLJ90,1” model number. It has the new 12-core Intel Xeon E5-2697 processor that Phil Schiller talked about at WWDC, running at 2.7GHz, plus 64GB of RAM. Like the MacBook Pro above, it’s also running Mavericks. 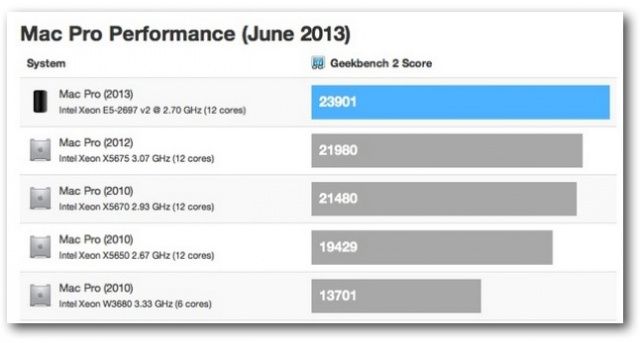 When compared to the current Mac Pro, which was released last year, the new model shows substantial improvements in many areas, but only slight improvements in others. Some of these results could be affected by software, however, and there’s a good chance they’ll change before Apple releases the Mac Pro later this year. After all, it’s not quite ready yet.