IOS Fonts is the most concisely-named website of the day. It shows you all the fonts available on your iOS device, lets you search them and even preview your chosen text in them. I love it… and yet I’m struggling to find any practical use for it.

The site works great on iOS of course, and presents you with two columns (one on the iPhone). On the left, the source and controls; on the right, the fonts, listed by name.

It will be of most use to developers, I guess, letting them choose which of the available fonts they should use for their apps. I like it for its limited trivia capabilities. Because you can choose to show which fonts were available for which iOS version (back to iOS 4) you can make some comparisons. Did you know, for instance, that iOS 6 sports 260 typefaces (this number counts all members of a family as a face, so there are six Helveticas and 11 Helvetica Neues), while iOS 5 had 222 and iOS 4 a pathetic 159?

So, bookmark the site and keep it for the future, when you’re next wondering if HiraKakuProN-W6 was in iOS 4 (it wasn’t – you’re thinking of HiraKakuProN-W3 which appeared in iOS 3, you silly billy).

Oh, and here’s one final thing to warm your cold, cynical heart: 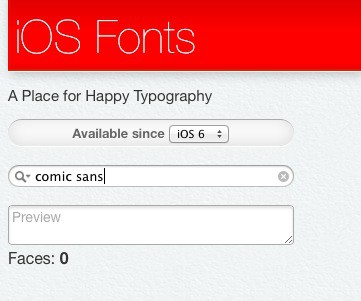