First Boston launched its CitizensConnect app in June, giving its citizens the ability use the iPhone to tag locations and upload photos of potholes and other urban hazards; now San Francisco is using the iPhone to build a better city too — through tracking cyclists with its CycleTracks app.

The express purpose of CycleTracks will gather data on cycling trips throughout San Francisco, to help the city better design its bicycle infrastructure.

When activated, the app uses the iPhone’s GPS receiver to record the details of a ride, then uploads the data to a central database — and that method of gathering that kind of data is probably unique in the nation, said Billy Charlton, Deputy Director of Technology Services for the SF County Transportation Authority, in an interview with CoM.

“We weren’t doing it for the kudos, but my phone has been ringing a lot. I’m getting calls from all over the country … it immediately struck a nerve. It’s an obvious piece of data that was missing,” Charlton said.

One might think that the cycling sphere’s perceived mistrust of authority might make the app somewhat of a bugaboo among cyclists; but Charlton said that they’ve already seen at least 350 users and logged over 1200 trips.

“The world of people who are riding bicycles, a world thats getting bigger and bigger, has sort of a more libertarian bent,” said Michael Schwartz, who works with Charlton on the project.

But he said that “folks are not anxious … this app is very upfront. We promise that that information will be anonymized.”

Charlton said the app will gather data at least through Spring 2010; he also said he expects the app to be unbalanced by record a preponderance of male cyclists — because, he suggested, men are more likely to be bike commuters, as well as more likely to be iPhone users — and added he hopes more women will pick up and use the app. 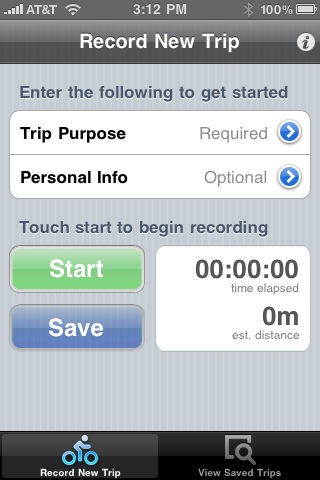