“Apple doesn’t limit cellular data throughput on its devices — there’s both no incentive for them to do so, and any traffic management is better off done in the packet core of the respective network operator rather than on devices. Sideloading tweaked carrier bundles isn’t going to magically increase throughput, either.”

Brown’s original report has since been deleted and he has resigned from his post.

Over the last few years, cellphone carriers have become notorious for throttling iPhone users’ data speeds. Most of the time carriers claim they only throttle users when they’re consuming way too much data, but that actually might not be true at all.

Joseph Brown, the guy who made all the iPhone carrier hacks for Sprint, AT&T, Verizon and T-Mobile has thinks he has proof that AT&T, Verizon, and Sprint have all worked with Apple to bake a soft throttle into your iPhone via carrier updates, and there’s nothing your can really do about it.

Here is Brown’s evidence from his report:

Apple and the carriers have implented coding to purposely slow down or limit the data speeds the device can achieve… iPhones are very complex devices with a very complex OS. The OS eats much more data, even when in idle mode, than most phones on the market. So by carrier request, Apple limits devices to “even out” the network, even if it means Galaxy users out perform Apple devices by such large scales.

Brown  posted the following screenshot of a section of code on an AT&T iPhone 5 that downgrades the iPhone’s network settings by switching it to ‘Category 10’ (14.4Mbps) when both the iPhone 5 and AT&T’s network support up to ‘Category 14’ speeds (21.1Mbps): 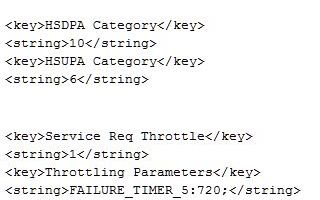 :Here we can see what is quite obvious to, really, anyone at this point from being jerked around so much by carriers. Yes folks, this is throttling coding. When we made the AT&T Hacked Carrier Update, this was the first line of coding to be scrapped when the project started.”

The AT&T code is present in both iPads and iPhones on the AT&T network, and as a result, you’re pretty much permanently throttled, even though you paid for an iPhone, and a data-plan, that are capable of much faster speeds. Glad you’re getting your money’s worth, right?

On Twitter Brown noted that the data-throttling taking place isn’t a hard-throttle that customers are used to seeing on 2G speeds, but it’s a soft throttle that slows users down just a little bit.

The report also goes into detail on how each major U.S. carrier throttles iPhone data speeds. Verizon and Sprint both permanently throttle down 3G speeds unless a hack is applied. Same with AT&T, however it seems that T-Mobile does the least throttling. To get all the nerdy details you can head to iTweakiOS to see if your carrier is screwing you over on data speeds too.