Evernote is a fantastically useful service, with clients for the web, Mac, PC, and iOS. The iOS version is as full featured as the desktop version, a rarity these days, and really makes Evernote my go-to app for keeping track of stuff of all kinds.

Here, then, are four fantastic tips and tricks to get the most out of the Evernote app on your iPhone, iPad, or iPod touch.

Create and Manage Evernote Reminders On Your iPhone Or iPad 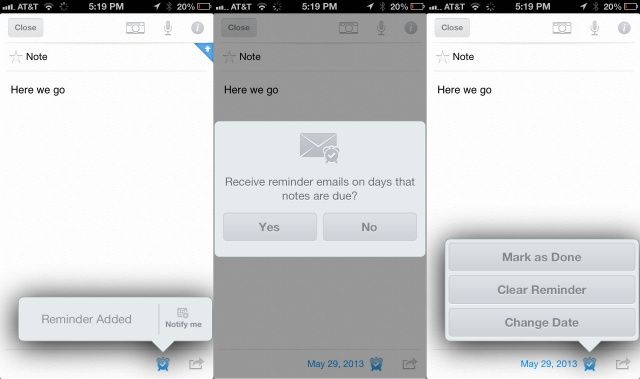 I really enjoy Apple’s own Reminders app, especially as it integrates with Siri. Recently, however, Evernote has added its own Reminder system. As I use Evernote for a ton of my daily tasks, I thought it might be something to try out.

If you’re looking to remind yourself of the things you keep in Evernote, or are just looking for an alternative to the Reminders app in iOS, here’s how to create and manage them in Evernote for iOS.

You’ll need the latest version of Evernote for this to work, so make sure you check your Updates tab in the App Store and update Evernote if need be.

Then, launch Evernote on your iPad or iPhone, and create a new note. Near the bottom of the note, you’ll see a little alarm clock icon. Tap it, and you’ll see a message that your Reminder has been Added. Tap the Notify me icon to the right, and then tap on the day you’d like to be reminded. It will hop over to the left, and then offer you times to be reminded. Tap on the time you’d like a reminder, and then tap on the Done button in the upper right.

You’ll get an in-app alarm by default, and you’ll also be given the option to have an email sent to you when the Reminder is due. The Alarm clock icon in the bottom right of your note will now turn blue, and the due date will appear next to it. You’ll also get a little Alarm clock icon in the All Notes screen, which, when tapped, will show you all the reminders you have set in Evernote. Tap it once again to hide your reminders. Tap the little calendar icon to the right to show your reminders by Date, Recently Completed, or Upcoming.

If you tap into a specific notebook, you’ll only see the Reminders for that notebook, keeping you from getting overwhelmed by all the Reminders across all the notebooks. If you want to see them all, of course, just tap into the All Notes view, as above.

If your notebook is shared, all the folks you share it with will also see the Reminders for that notebook, making this a super handy way to collaborate via Evernote. 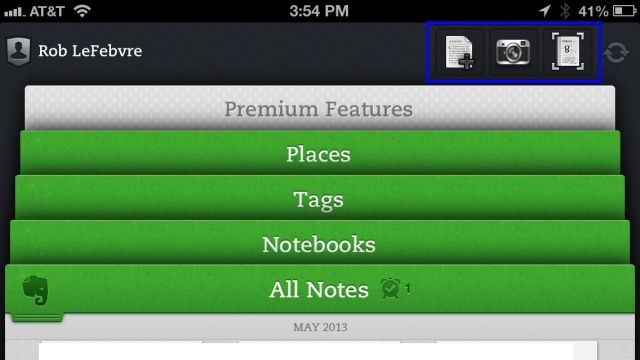 The latest version of Evernote for iOS includes a new Home screen and Quick Notes buttons, both of which make creating a new note in Evernote super quick and easy.

Now, you can create notes with the Quick Notes buttons, which helps bypass the typical way of tapping into a notebook, hitting the plus button, and then filling out the details.

Here’s how to jump right in with these new buttons, creating new notes right on your iOS device quickly and efficiently.

Launch Evernote for iOS from your iPhone or iPad, and you’ll see the familiar Home screen, with green tabs for All Notes, Notebooks, Tags, Places, and the grey Premium Features tab. In the upper center area, or the upper right if you’re holding your device in a landscape orientation, you’ll see three icons.

Starting at the left of these icons is the Add New Note button. Tap this to go right to the note editing process, adding body text, images, or audio as you like.

The next Quick button looks like a camera. Tap it to go right to the Add Image Note screen. It looks a lot like the iOS Camera app, with a different shutter snap button at the bottom. Simply aim and shoot anything you like. Evernote will process the image for a second, and then you can either capture more photos to go into the note, or hit the blut checkmark botton to finish adding images. The note will be titled Snapshot, but you can edit that in the note itself.

The third icon will take images from your Evernote Smart Notebook, by Moleskine. This is a special, purchased-separately notebook that works with Evernote for iOS and allows you to save information rich images and notes from the special notebook. 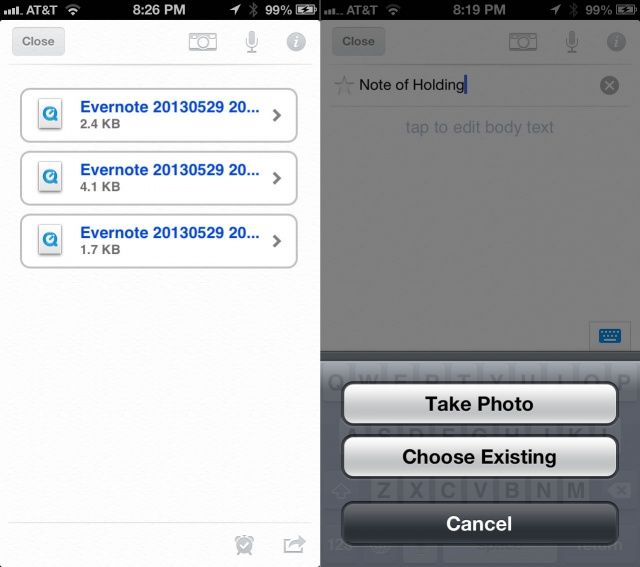 Evernote is a fantastic notes storage system, synched across iOS, web, and computer platforms so you’re never missing your stuff.

Did you know, however that Evernote allows you to add attachments to your notes, letting you connect images and audio with ease?

It’s super easy, and I’m here to show you how to do so on your iPhone or iPad.

First off, open up a note you want to attach something to in Evernote for iOS, on your iPhone, iPad, or iPod touch.

To attach a photo, tap on the little gray camera icon, and then tap on Take Photo to capture a new image from your iOS device’s camera, or Choose Existing to grab an image from your Camera Roll. Once attached, you’ll go right back to the Note editor window, where you can type in any identifying details and such.

To add audio, tap on the little Microphone icon next to the Camera icon, and begin recording when you see the dark gray recording bar drop down from the top. Record your audio, singing, talking, or playing the kazoo into your iOS device’s microphone, and then hit the Done button. You’ll go right back to the Note editing window, and your audio will show up at the top of the Note itself.

And? That’s it. Now you can attach all sorts of images and sound files to your Evernote database.

Automatically Import Stuff From The iOS Clipboard Into Evernote 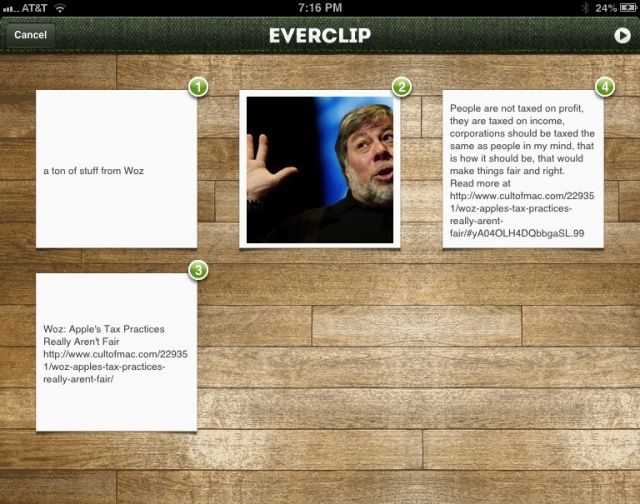 As an Evernote junkie and web-searcher, I use Evernote Web Clipper on my Mac, like, all the time. When I come across a great website, story, or even just some text on a page, I clip it right to Evernote, and then have the clipped notes with me on any platform, whether on the go with an iPad, iPhone, or at home on my Mac.

I’ve long wished for a way to do the same thing from my iOS devices, though. I typically copy the URL from my iOS browser of choice, then launch Evernote for iOS and paste it in there. Thank goodness, though, there’s another way, with EverClip, an iOS app for iPhone or iPad that lets you keep everything you copy to the clipboard–images, text, website URLs, whatever–synced up in an Evernote note.

Download a copy of EverClip to your iPhone or iPad. I grabbed a copy for my iPad mini, which runs a bit more ($5.99) than the iPhone version, at $2.99. You’ll be asked to login to Evernote at first, so enter your credentials and authorize EverClip to use your Evernote account.

Then, hop into an app like Safari, and copy the URL from the address bar. Then, select and copy some text from the same webpage, or a different one. Next, save an image from the web, or any other app, and then copy it in the Camera Roll.

Now, hop back into EverClip, and you’ll see all those things in little clips, right on the wooden background, ready to send to Evernote. Tap the triangle icon in the upper right, and then tap the little document editing icon. Type in your text, and hit the “Done” check mark. Tap each of the clips in the order you want to save them, and then preview the export with a tap on the little triangle icon in the upper right again. Tap the right facing curved arrow to send it to your Evernote account.

Notice that any web address you copy to the clipboard will be sent to Evernote as a web clipping, so no need to grab more from the web page than that, if you want to keep it all.

While it’s kind of a bummer that you can’t buy one universal app for both your iPad and iPhone, this is a pretty slick way to get stuff into Evernote when on an Apple mobile iOS device.