As the seventh-generation iPhone approaches, the debate is opening up again: what should Apple call it? Ex-Apple ad man Ken Segall has raised convincing arguments saying that Apple is shooting itself in the foot with the “S” series naming convention, signalling to consumers that every other year, you get a half-baked iPhone instead of a fresh new one.

Now, some slim evidence is pointing towards the notion that Apple might be listening to their former advertising prodigy, and that the next iPhone might be called the iPhone 6.

There’s not a lot to go on here, but Vodafone UK’s stores are listing a “4G iPhone 6” in their system. The shot was taken by a Vodafone employee. 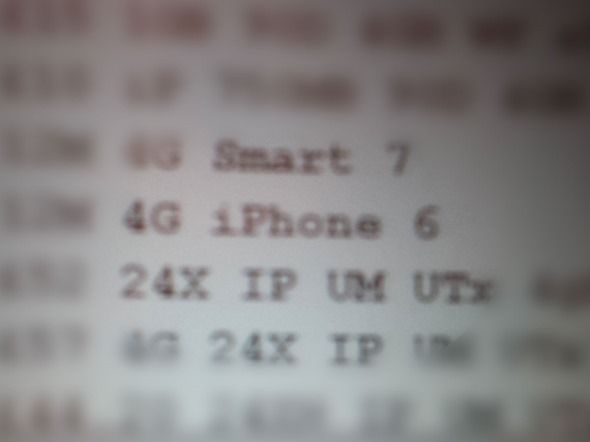 This doesn’t mean much. Placeholder product names are put into mobile carrier databases all the time by employees who have no inside track on what Apple will be calling their next device. At the same time, though, these same databases are sometimes are first glimpse at upcoming products that have yet to be announced.

So this is all worth taking with a big grain of salt. Yet Apple would be wise to consider a different naming scheme for the next iPhone. The ‘S’ naming scheme, while honest, does imply to consumers that they are getting only a slightly spec-bumped, year-old phone. What the ‘S’ stands for usually depends: with the iPhone 3GS, it stood for ‘speed’, while with the iPhone 4S, it stood for ‘Siri.’ But it doesn’t send as strong a statement to consumers as a whole new number, and you don’t see the likes of Samsung dicking around with launching, say, Galaxy S4 And A Halfs.

My guess, though, is that Apple won’t call the next iPhone the iPhone 5S or the iPhone 6. Evidence is increasingly pointing to Apple launching an entirely new ‘budget’ iPhone this year to court mid-range customers. If that happens, the iPhone — for the first time! — will become a family of devices… and when Apple was on the cusp of turning the iPad into a family, they helpfully rebranded the latest iPad into the “new” iPad. I’m starting to think Apple will do the same with the iPhone this year, but we’ll have to wait until September to find out.