Accessibility is a priority to the designers and engineers at Apple. They have built some amazing software right into each operating system, from OS X to iOS, all for no etra charge and no need to add extra programs on to be able to use the products if you have a visual, hearing, motor, or cognitive disability.

But if you don’t have a disability (yet–we’re all just a lucky step or two away), you can take advantage of these systems for yourself or other family members.

Here are five different ways to do just that. 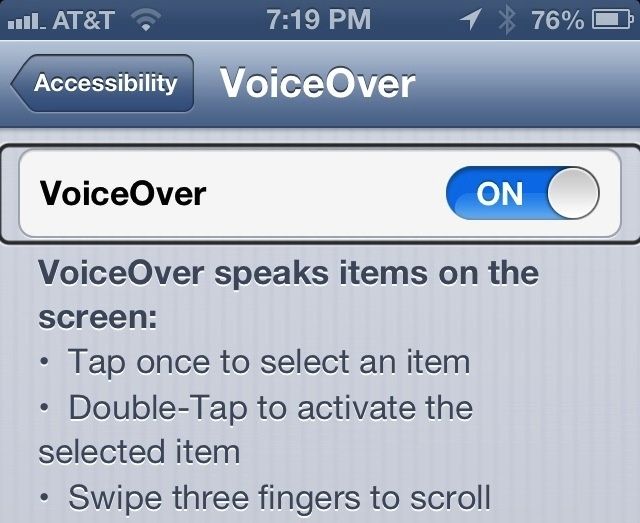 VoiceOver is the name of the amazing text-to-speech feature in iOS and Mac OS X that allows those with visual impairments to use their Apple devices right out of the box, without needing help from a sighted person. On the iPhone or iPad, it empowers those with a visual disability to become more independent and function on a day to day basis in a world that isn’t really set up for them.

As an individual without a visual impairment (aside from a slight nearsightedness), I use VoiceOver to have my iPhone read to me when I’m in the car but need to catch up on email or want to hear what folks are doing on Twitter. Here’s how to set that up.

First, tap into your Settings app. Tap General, and the scroll down a bit to Accessibility. Tap that, and you’ll go to the main preferences for all types of accessibility options built right in to iOS. Before tapping VoiceOver, scroll down a bit and tap on Triple-click Home. Not select VoiceOver with a tap, and then hit the backward Accessibility arrow to go back to the main preferences page. Now, whenever you triple-click the Home button on your iPhone, iPad, or iPod touch, you’ll toggle VoiceOver on or off. You can slow VoiceOver down or speed it up with the slider; simply swipe it to the left, toward the turtle to slow it down, or to the rabbit on the right to speed it up.

Now, tap on the VoiceOver button in the main Accessibility preference page, then toggle VoiceOver to ON. When you turn VoiceOver on for the first time, iOS will let you know that there are different gestures to use while VoiceOver is enabled. Those are listed just below the ON/OFF toggle switch there. To select any item on the screen, tap it once. Then, to activate the selected item, tap anywhere on the screen twice. To scroll, simply swipe with three fingers.

Now, with VoiceOver enabled, click your Home button and go to your Twitter app. Tap the icon once to select it (you’ll see a thin black line around the icon you selected), and then tap your screen twice to open it. To start reading from the top, simply swipe up from the bottom of your screen with two fingers. To stop the reading, tap twice with two fingers.

VoiceOver works with a variety of apps in iOS, but be aware that not all apps will support it fully. Make sure you try it out before you count on it to work in a critical situation.

Another accessibility option built right into iOS is Zoom. Like VoiceOver, it was originally created to help those with a visual impairment access their iPhone, iPad, or iPod touch. Zoom is made for those who need things magnified on the screen, and it can be pretty darn helpful for those of us who may not have a specific visual disability.

Some apps zoom in within the app itself, like Maps, Safari, or Google Earth. That doesn’t help if you need the buttons and iOS controls magnified, or the text in apps like Mail, right?

Here’s how to set things up with Zoom.

Tap into your Settings app, and hit General. Scroll down to the Accessibility options. When you tap there, you’ll see the option for Zoom, and Large Text. Tap Zoom, and then toggle it to ON with the switch. Your screen will zoom in to the default setting, and you may not know where on the screen you are, depending on that zoom factor. Never fear, since you can drag around the screen with three fingers to orient yourself. 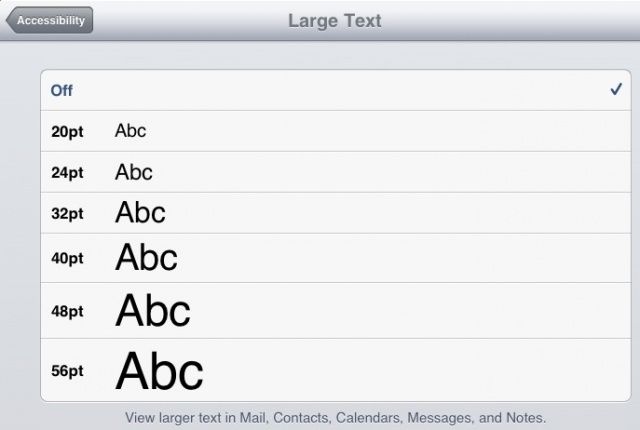 Now hit the back arrow to go to the main Accessibility page. Tap on Large Text this time, and tap on the font size you’d like Mail, Contacts, Calendars, Messages, and Notes to appear in. That way, when you’re using those apps, you won’t need to squint to see the tiny text that passes for typical thereabouts.

Hopefully, you’ll now be able to see things on your smaller screen more easily, whether you have a visual impairment that requires it, or your eyes are just aging, or both.

Have Your iPhone Highlight And Speak Selected Text Out Loud 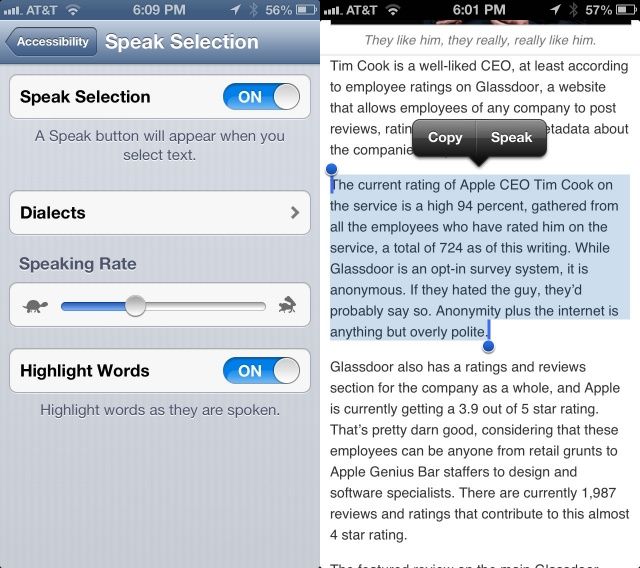 Another accessibility option originally created for those with visual impairments is Speak Selection. There are times when you may not want to turn the entire VoiceOver system on, having Siri read every button and icon on the screen, but would prefer to just have your iOS device speak text you’ve highlighted on the screen.

As an added bonus for those with print or learning disabilities, you can have your iPhone or iPad highlight the words as it speaks them for true bi-modal output (seeing and hearing the words at the same time).

To enable this great feature, tap into the Settings app, then into the General settings. Next, tap the Accessibility section, and then look near the bottom of the Vision area. Tap Speak Selection, then toggle it to ON if you want to hear your iPhone read words you select aloud. Now, when you select text in any application on your iPhone, you’ll see a Speak button next to the highlighted text.

You can choose a Dialect here, as well, with a tap on the Dialects button. I dig using the Irish English accent when I’m feeling fancy. Another great option is to have it Highlight Words as it speaks them. Simply tap on the toggle to turn this feature ON. Now when you need your iPhone to read to you, and see the words it’s reading, you’ll be all set.

Use Your iPad or iPhone Without Hardware Buttons Via Assisted Touch 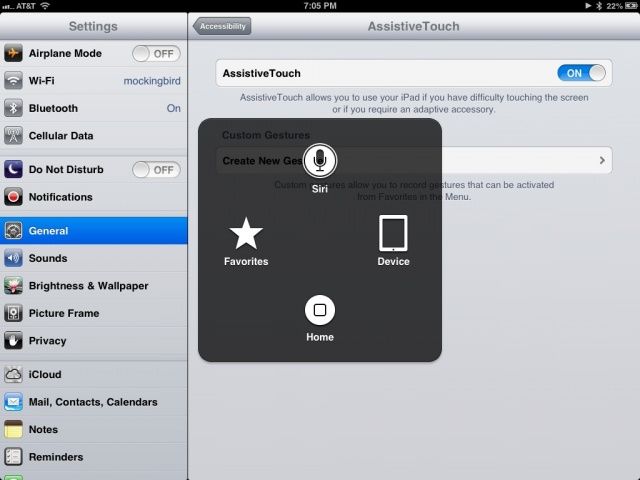 Assisted Touch is an accessibility feature for iOS, usable on any iPhone, iPad, and iPod touch, that recreates the hardware buttons and other gestures that someone with a motor disability might need to use. It also lets other folks use the Home, volume, screen lock, wake/sleep, and multitasking bar without using any of the hardware buttons themselves.

This can be pretty handy if you have the device in a case or holder of some type where accessing the buttons is tricky or impossible, like a home-made picture frame, for example.

Tap into the Settings app, and then open the General area, then tap on the Accessibility button. Scroll down to the Physical & Motor section, and tap on Assistive Touch. Toggle the feature ON with a tap.

Notice that a little semi-transparent rounded rectangle with a white circle in the middle will appear. You can tap and drag this circle to anywhere along the right or left edge of the screen. Now, tap the new Assistive Touch icon, and you’re able to tap to activate Siri, the Home button, or access your own, custom Favorite gestures, as well as more Device-centric options, like volume, lock screen, and screenshot options with a tap on the Device icon.

Tap on Device, then More, then Gestures. You can tap on two, three, four, or five finger gestures here, and the specific number of circles will appear on the screen. Now, your single finger tap or drag will emulate that many fingers. This way, you can swipe with three or four fingers with a stylus, for example.

You can see how this would be helpful for those with or without a motor difference, letting us all use the hardware buttons and activate multitouch gestures when we otherwise can’t. 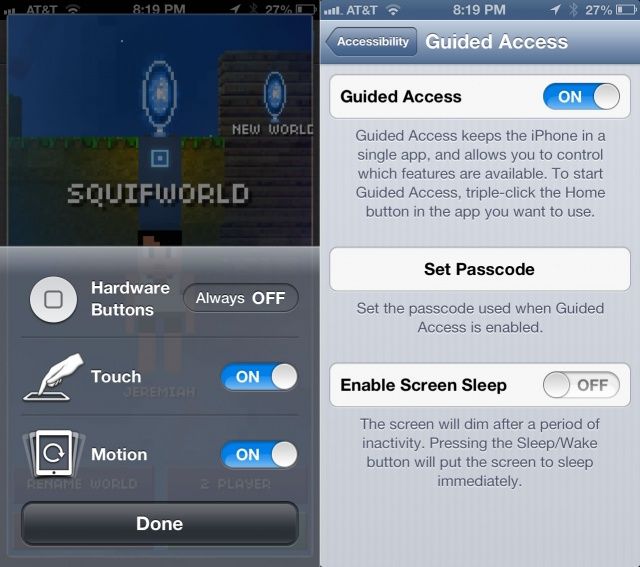 We’ve all done it. Passed our beloved iPhone handset to a young child or clumsy friend, in hopes that they’ll play a game for a bit and let the grownups continue talking. Then the youngster in question ends up hitting the Home button, dropping into that secret stash of photos, or looking at our web history. Or even worse, playing some splatter-horror game that you forgot was even on the dang thing.

Guided Access is part of iOS 6’s accessibility options, but it can be useful for folks without the need for that specific adaptation. Here’s how to enable it for use.

First, head into the Settings app, and tap on the General tab. Then scroll down to Accessibility, and drop into that with a tap. Scroll down to the Learning section, and tap on Guided Access to, well, access those preferences.

Toggle Guided Access to ON at the top there, and you’ll be asked to set a Passcode. Use something different than your device passcode, unless ou haven’t given that to the children you’re passing the device to. If nothing else, it will freak them out when they get too precocious and try to hop out of Guided Access with your iPhone password. You can also enable Screen Sleep here, to put it to sleep on a different schedule than otherwise.

Tap the Accessibility arrow in the upper left to back out to the Accessibility preferences, and scroll down to Triple Click Home. Tap there and set Guided Access as one of the options that will pop up when you hit the Home button three times in rapid succession.

Now pop into any app you want to have the kids in your life use. One of my personal favorites is The Blockheads, by Majic Jungle Software. Triple click the home button, and the image will shrink down and give you some options. Tap–obviously–the Options button, and then set Hardware Buttons to OFF, Touch to ON, and Motion to ON, so that they can play the game, at least. If you’re using an app that has buttons or areas of the screen you don’t want the kiddos to be able to touch, draw a circle around that area on the screen with your finger.

Then, and this is the important part, tap the Start button at the top right of the screen. You’ll enter a passcode if you didn’t do the step above, and then the game will start. The parts of the screen you circled will be greyed out, covered by diagonal stripes.

To get out of Guided access, triple-click the Home button again, enter the passcode you created, and you’ll be out and using your iPhone as per usual. This works for iPhone, iPad, and iPod touch, so have at it!