Through a glass viewed darkly, if not even muculently: the iPhone camera stinks.

To be fair, that’s not entirely Apple’s fault. While there are certainly better camera sensors out there than the one Apple chose to install as the retina in their little iBall, there’s a clear correlation between sensor size and image quality when it comes to digital cameras, and you can only make a cell phone’s sensor so big.

Nothing to be done about the sensor then. But like a fly hovering over hamburger, gadget tinkerer Bhautik Joshi had a seemingly stupid question buzzing around in his brain meats: can you improve the quality of the images the iPhone takes by attaching an old Canon SLR lens? 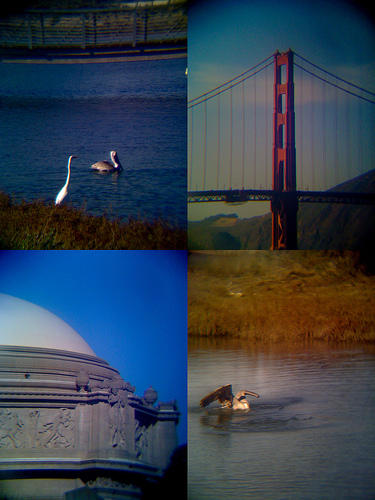 As it turns out, you can… or at least change them. Of course, the challenge is attachment, so Joshi had to craft an “optical coupler” to translate the light being bounced from the fovea of the Canon Lens to the pupil of the iPhone’s. His solution was to take three lenses from an old CD player, stuck together with putty, to bend the light from the back of the SLR lens and bounce it to the handset in a shape more suitable for the iPhone’s pinhole camera. Then he just stuck the whole thing to his iPhone using duct tape.

The results are interesting. Joshi’s Phone-O-Scope produces fuzzier, Holga-like images, with “strong chromattic aberration” and “bizarro lens distortion” but much, much stronger depth of field effects. Joshi notes that the culprit is probably the CD lenses used to bend the light.

Basically, instead of building your own Phone-O-Matic, you can get the same results by taking a snapshot on your iPhone and then applying CameraBag’s 1974 filter to it. But, of course, that’s not the point. This is a maker’s “because I can” sort of project, and as usual, the answer is why sure you can… just use lots of duct tape.