Rumor has it that Apple’s fifth-generation iPad — expected to launch later this year — will boast a new form factor much like the iPad mini’s, with thinner bezels down each side of its display. The first evidence we have to prove those claims has surfaced today in the form of a leaked front panel.

The images above and below come from French blog NowhereElse, which has leaked a number of Apple components in the past, including those for the iPhone 5 and the iPad mini ahead of their launches. You’ll notice the bezels either side of the display are much thinner than those on existing 9.7-inch iPads.

Rumors have claimed the next iPad will look much a larger iPad mini, with a significantly thinner and lighter form factor, and the same design. The iPad has kept the same design since the iPad 2 launched back in 2011, so it’s time Apple’s popular slate got a new look. 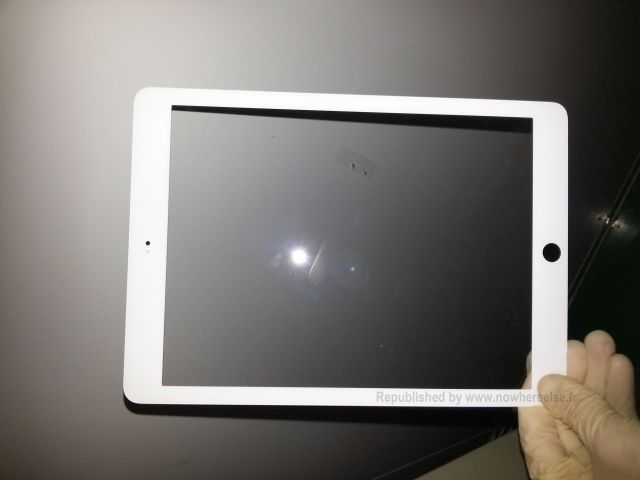 The Cupertino company has already modified its iOS software for the iPad mini to prevent accidental screen presses when your thumbs are holding the sides of the device, so thinner bezels on the full-sized iPad are certainly possible.

Having said that, there is a possibility this front panel isn’t a genuine Apple component, and that it was made by a third-party based on the iPad rumors we’ve been hearing in recent months. With that said, we’ll take it with a pinch of salt until the device is confirmed.

According to a report from DigiTimes on Tuesday, the fifth-generation iPad will enter mass production between July and August, ahead of a launch later this year. In addition to a new form factor, the device is expected to get a new A6X processor and improved cameras.