Even though it’d probably be pretty cool, we’ve concluded that a touchscreen MacBook Air or iMac probably wouldn’t be fun to use for an extended period of time, thanks to gorilla arm syndrome.

But what if Apple made an iPad/MacBook Air hybrid? It turns out that Apple has been considering the idea of it for sometime, and based on its patent filings, the iPad/MacBook hybrid would look a lot like some of the PC options that are already on the market.

Filed in Q3 of 2011, Apple outlines its ideas for a touchscreen notebook computer that has a removable display. What sets Apple’s design apart from other products like the Asus Transformer, is Apple want the base station to power the display wirelessly when attached.

Apple’s patent also includes a cable attached to the display for powering the device, and data would be transmitted to the display via a wireless chip so that the base station and display can still work together even when they’re not physically connected.

The patent reminds us a lot of the Microsoft Surface and its fancy keyboard, but Apple would want its hybrid to actually function as a quality tablet and laptop, rather than the jack-of-all-trades-master-of-none attitude of the Surface.

While we’d love to see Apple release an iPad/MacBook hybrid in the future, we wouldn’t get our hopes up just yet. Apple files hundreds of patents a year that they they never use. It’s likely that this little hybrid will never see the light of day, but we can always dream. 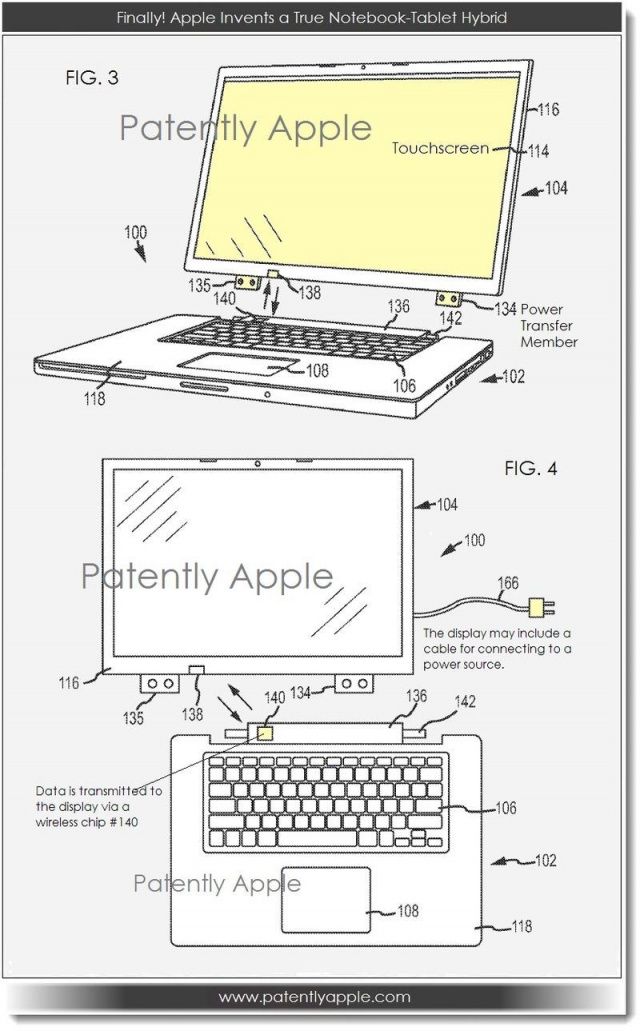