The iPhone and iPad are magical devices because of one thing: the well-designed hardware and software works in conjunction to make everything just work. The iOS operating system is a thing of beauty, not least of which because there is so much to explore and learn about.

As a touch-based platform, iOS uses gestures like swipes and taps to let you control things with intuitive ease. However, there are bound to be less well-known gestural commands in such a complex set of software. Here are five of the better ones.

Get Rid Of Pesky Notifications On The Fly 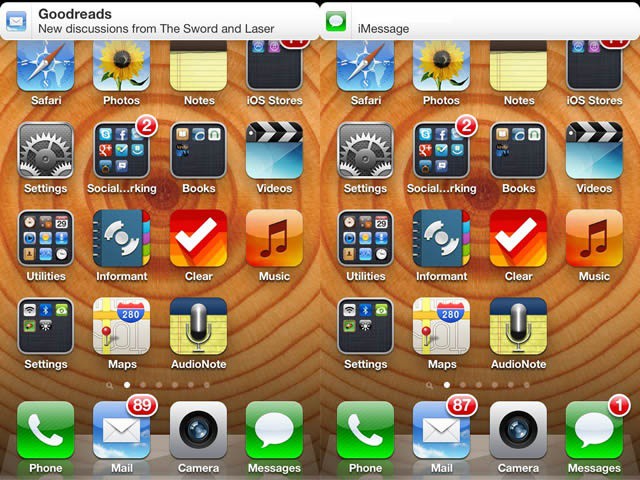 Notifications on the iPhone can be annoying. Right? They drop at inappropriate times, and I always end up accidentally activating them. Of course, my iPhone is more than happy to hop over to the application that sent the Notification in the first place. There are, however, a couple of cool ways of dismissing them without activating them, short of waiting for them to go away, which is what I’ve done since they appeared in iOS 5.

The first way to dismiss the active notification from the top of your iOS device screen is to touch and slightly pull down on the banner notification, then flicking it up. In essence, you’re activating notification center here, then dismissing it.

The other way to do this is to swipe from right to left across the banner, with an almost subliminal down up motion, which the original tipster says can be fairly unreliable, so your mileage may vary.

You’ll need to be careful about holding your finger down since iOS will interpret anything less as a tap, and you’ll end up activating the Notification rather than dismissing it. Give it a try and let us know how it goes. 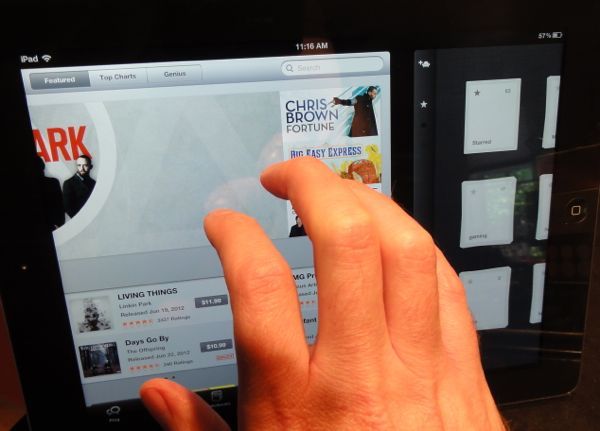 It’s probably true that you’ve learned some great iOS gestures with two or three fingers, like pinching in or out to zoom and the like. But did you know that you can use some multitasking features with just the addition of another finger or two?

Use the claw technique to activate the following swipes on your iPad and you’ll be one step closer to gestural iOS nirvana. Or is that nerd-vana. Either way, I suppose.

To do “the claw,” bunch up all your fingers into a claw shape and touch them all on the screen at once. Then flick upward from the bottom of the screen. Boom! The multitasking bar will show up at the bottom of your beloved iPad, ready to let you tap your way to a different app with a single-finger tap. Want to close it up again? Simply claw swipe down and the bar will hide itself again. This is the same thing that happens when you double click the Home button, so never you fear.

Via: Here’s The Thing

The Claw Pinch – Go Home Without The Button 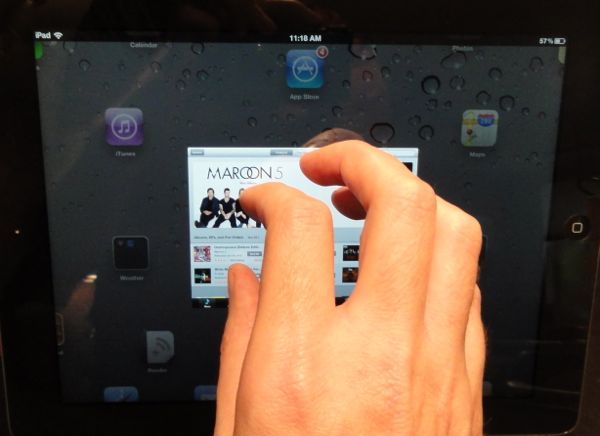 Here’s a tip that never fails to amaze my friends and relatives when I show it to them. It may seem a little “meh” when you read about it, but try it and you’ll be sharing this quick “get to home” trick on your iPad, your parents’ iPad, and maybe even the iPad of strangers in the coffee shop.

Just being able to keep your tapping fingers near the screen, without having to drop down to the Home button, is a time and brain saver that should make your workflow on the iPad just that much better in your day to day interaction.

Touch all five of your fingers to the iPad screen when spread out, like a “spider,” and then pinch them in to “the claw.” Seriously, I know it sounds like some weird martial arts move, but do it anyway, and you’ll be hooked.

So, to repeat: pinch all of your fingers in on the iPad screen, from any app you’re in, to go to the Home screen. Simple, easy, and very Apple.

Move Between Tabs In Chrome Mobile 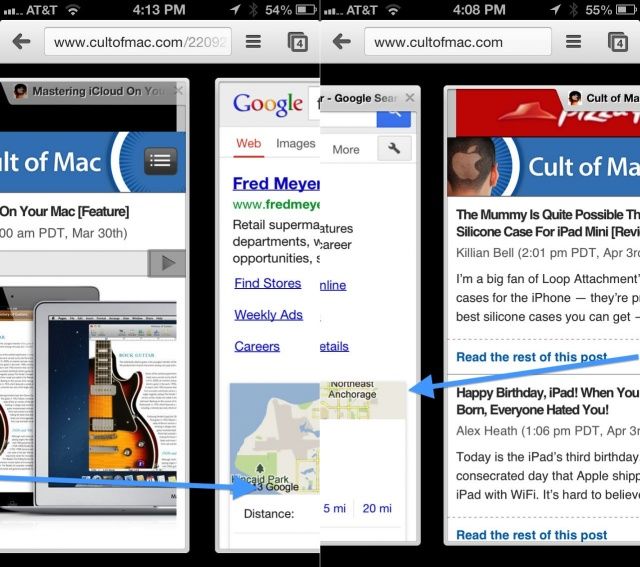 Safari is a great browser on iOS, as well as the default one. Chrome is also a fantastic browser, and I find myself using it more and more as it integrates well with its Mac version, with bookmarks and such synching nicely due to a unified Google sign in.

Tabbed browsing is great on both the iPad and the iPhone, and Chrome implements it a bit differently per device. The iPad has tabs similar to that of the desktop app, while the iPhone displays tabs only when you hit the little tab button in the top right corner of the screen.

You can also navigate between tabs in either version of Chrome using naught but a swipe gesture.

To move between tabs in Chrome for iPad, swipe over from the right or left bezel (that’s the dark, non screen area around the iPad display) to move a tab left or right, in order.

This is clever in Chrome for iPad, but makes even more sense when you’re using Chrome for iPhone. Instead of hitting the button, then scrolling vertically to find the tab you want, you can swipe over from the left or right bezel to rotate through every open tab on your device. It’s a lovely time saver, and something I’d love to see Safari employ in the future.

Tap, Swipe, And Rotate In iPhoto For iPad

iPhoto for iPad is a fantastic photo editing app with a ton of multitouch gesture support. When editing and looking through your photos within the app on your iPad, all it takes is a bit of learning to get these gestures down and make your time with iPhoto just that much more productive and fun.

First up, tap into a photo album in iPhoto for iPad, and drag the little three horizontal lines widget at the top of the thumbnail column. Drag to the right to get up to four columns, and to the left to reduce the number to one. To make it disappear entirely, drag any photo in the list to the left. Bring it back with a swipe from the left bezel to the right. Of course, you can tap the grid icon there to show and hide the thumbnail viewer.