It seems like just yesterday that I was complaining about the lack of sharing and export in iOS reading apps… Maybe that’s because it was only yesterday. I was actually moaning about Read Later apps, but I mentioned Kindle and iBooks as being equally bad.

Now, just a day later, I discover that there’s a free Mac app which will suck the notes and highlights out of your iBooks and package them up in a nicely-formatted PDF, or direct to Evernote. It’s called Digested, and it does exactly what it says it does.

To use Digested, you just make sure it’s running (it’s a standard app) and plug in your iDevice of choice. If you have the iBooks settings to automatically sync notes and highlights via iCloud, you can use any of your iOS machines. 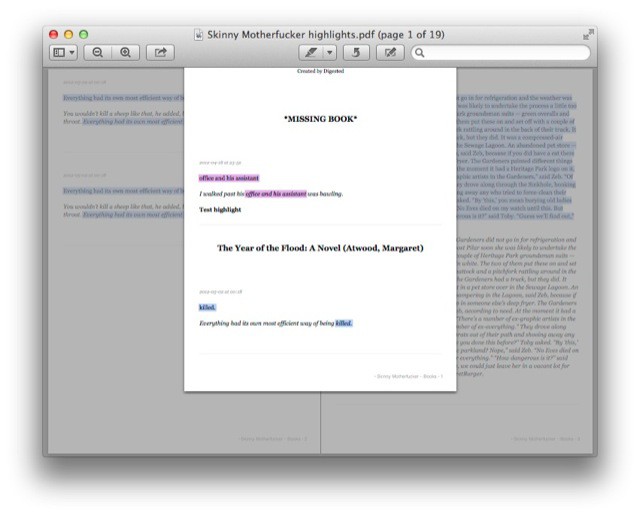 You’ll now see a window listing all of your books which contain highlights or notes. By default they are all selected, but you can also make a selection of your own. Once done, hit either of the buttons at the bottom to export. I tried both.

Evernote export adds each note as a note to the notebook of your choice. You get the highlighted text along with any notes you may have added. What you don’t get is the title of the book the notes camera from, making it pretty useless.

PDF export is better, and as you can store and index PDFs inside Evernote (with a Pro account at least) this might be the best bet for now. Digested creates a single PDF with section headers for each book (with the book’s title) and the snippets underneath.

It’s a great start, although lacking somewhat for practical use. I’d like to see it track which snippets you’ve imported so you can grab just the updates. And putting the book titles in the Evernote notes is pretty essential.

Otherwise, full marks. This is an essential app for anyone who takes a lot of notes, and tips me over back to iBooks in my ongoing see-saw ride between iBooks and Kindle.

Source: Driven Pixels
Via: Brett “I Just Built This” Terpstra