Here’s a little something that might get you formatted-text nerds excited: Rich Notes, yet another new text-editing app, lets you write on the iPad in rich text. That is, you can italicize and embolden your words right there on the page. Yes, this works with some other apps, but Rich Notes lets you use keyboard shortcuts to do it. If you have an external keyboard hooked up, CMD-B and CMD-I will do just what they do in every desktop app.

Rich notes comes from the developer DenVog, who also makes the excellent Index Card app for iPhone and iPad. It’s due to launch on February 20th. Let’s take a look:

First, what Rich Notes is not. It’s not a Markdown editor, and therefore doesn’t come with a Markdown keyboard row. You can of course write in Markdown, just as you can anywhere that text is supported (hell, you could even write it on paper with a Sharpie, although conversion to HTMinL might be a little trickier than usual).

Neither is it meant for writing for the web. There’s no built-in browser, no export to [chosen format here], and no preview. Rich Notes is a nuts-and-bolts text editor with formatting, and it does that job pretty well.

While the app is free, you’ll have to pay to get all the fonts and formats using the in-app store. The best bet is to just spend the $2 for the Format Pack, which gets everything at once. I have mixed feelings on in-app purchases. On the one hand, they let you try an app before you buy, and even then you only need to pay for the features you want. It also keeps things simple, as there is only ever one download. It’s like shareware for iOS.

On the other hand, you can’t just buy the app and be done. And if you have multiple devices, you need to “restore” your purchases on each one, even as the download is pushed automatically to all of them. This is a pain. 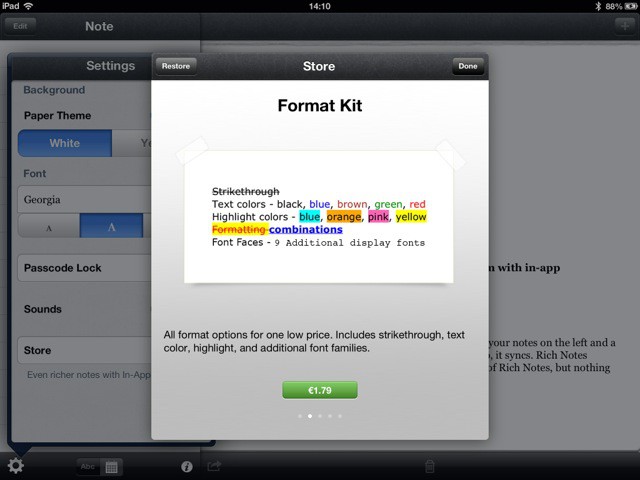 Anyhow, you’ve bought the Format Pack for $2 instead of buying the Fonts, Highlighting, Strikethrough and Text Color packs for a buck apiece. What do you get? Here’s the official list:

The app ships with Georgia and Verdana, but your purchase gets you the following:

This is a little cheeky as pretty much all of these are built into iOS. Still, that’s a problem with in-app purchases: if the app itself cost $2, I wouldn’t even have mentioned it.

Rich Notes uses a similar note-taking metaphor to apps like Plain Text and Simplenote, with a list of your notes on the left and a search bar at the top of the column for winnowing down long lists. And like any good note-taking app, it syncs. Rich Notes doesn’t use Dropbox, though. It uses iCloud, which means that you’ll be in sync with other instances of Rich Notes, but nothing else.

On the other hand, that’s perfect for taking notes. And you can always choose to export via Mail.

Export is limited but simple. You tap the little sharing arrow (the arrow bursting forth from the mundane confines of a box) and choose from Mail RTF, Mail Plain Text, Copy Clipboard and Duplicate. Would it be nice to open in other apps? Sure, but the clipboard’ll work just fine.

Import is a little more annoying. Rich Notes doesn’t show up in the standard “Open in…” popover in other apps, neither for RTF files nor even TXT files. The only way to get files in is to copy and paste them, and then you lose all RTF formatting. To be fair to Rich Notes, you can’t even copy formatted text from Mail into Pages, or vice versa. It’s a limitation of iOS’ pasteboard, it seems, rather than of the app.

Rich Notes does the job of “distraction free” writing admirably.

The Rich Notes’ environment is pleasant, and easy to use. Sorting notes by date or by title is done by tapping little ABC or calendar icons at the bottom of the list, and the source list gets out of your way when you edit. In fact, if you wanted a “distraction free” writing app, then this one could do that job admirably. It also uses a kind of two-mode model: viewing and editing. When you’re viewing, there’s no keyboard. When you’re editing, the keyboard pops up. This lets you use the full screen for reading, and entering editing mode is as easy as tapping in the text to get started.

The rich text tools are arranged as an extra keyboard row, and this also contains a forward-delete key (yes!), plus keys to move the cursor’s position left and right by in increments of one letter or one word.You’ll also find a dedicated undo button plus keys for single quotes (or apostrophe), double quotes and a single dash (’ ” and -).

The rub (isn’t there always a rub?) is that the app nags the hell out of you. Every time you hit one of the non-purchased options from the extra keyboard row, or from a popover menu, you are whisked off to the in-app store. This is fine the first time, but for an app designed for writing, it’s pretty annoying to be forced to dismiss a dialog box every time you hit the wrong key. It’d be much better if you could switch the extra, non-purchased functions off after the first showing.

The developer seems to be taking the approach that built-in is better for most people, so we get iCloud and iOS keyboard shortcuts instead of Dropbox and TextExpander. Denvog:

Rich Notes does not support the TextExpander app. While it’s popular, I’ve decided to stick with iOS shortcuts which are free and available to all the apps on your device.

TextExpander is so much more powerful than the built-in shortcuts that I’d say it’s essential for any iOS writing app. In fact, it’s probably not a stretch to say that anyone nerdy enough to want an RTF editor for their iPad is probably already a TextExpander Touch user. Still, this is V1.0, and many great apps shipped without TextExpander support at launch.

The lack of TextExpander support might turn many people off.

And given the lack of import/export options, maybe Dropbox syncing would just lead to frustration every time you want to open an RTF file in Rich Notes.

More annoying is that you can only use one font in a note. Want to put your headers in Helvetica but use a serif face for body text? Tough. Rich Text only lets you use one font at a time. Again, no real big deal for a notes app, but it is called Rich Text, after all.

Rich Notes has some neat little gestures to help speed things up.

Rich Notes is a pretty good v1.0 release, and does a great job of letting you take formatted notes. The lack of import and export options makes it almost useless for anything else, though, including the writing of long-form articles which could really benefit from a little RTF polishing.

For now, I’ll stick with the majestic Writing Kit, which allows RTF as one of it’s many export options (although you need to write in Markdown). But as a long-time user of Denvog’s excellent Index Card, I know that he iterates constantly, and also listens to the requests of his users, which should mean that many of the currently “missing” features might soon be incorporated.

The App Store encourages the release of very raw apps, and rewards the “freemium” model.

As it is, Rich Text is a great lens through which to see both iOS and the App Store. It really pays to release an app in a very raw state and — if it gains traction — put the work in to add new features. Otherwise you could work for a year only to see the app disappear into nothingness on launch day.

It also pays to use the in-app purchase “freemium” model, as people are seemingly too cheap to pay $2 for an app, even from a known-good developer.

And two additions to iOS would make everything better. First, rich-text support. It works in Mail, so why not everywhere? Second, a less annoying way to restore in-app purchases. When I reinstall an app I previously paid to upgrade, those upgrades should be unlocked automatically. I can;t see any reason not to do this.

So, go check out Rich Notes. It’s free after all (and Universal).