Display Recorder, a popular tool that records what’s happening on the display of a jailbroken iOS device, has today been updated to support the iOS 6.1 firmware. The update follows this week’s evasi0n release, which became the first untethered jailbreak which supports the latest iOS devices — including the iPhone 5 and the iPad mini.

App and tweak developers have been rushing to update their offerings for iOS 6.1 since they discovered evasi0n was coming, and while there’s still a lot that’s not yet ready, the updates are coming thick and fast. Ryan Petrich’s Display Recorder is one of the latest to get some attention.

While Display Recorder is just a novelty for some, it can also be extremely useful to others. For app developers and reviewers, for example, it allows them to show exactly how their apps works on and iOS device, and also enables them to create tutorials and how-to guides.

There are other ways to do this, of course, but Display Recorder makes it simple — and it doesn’t require a Mac or PC. Furthermore, it allows you to adjust frame rates and quality on the fly, and records your tap inputs. 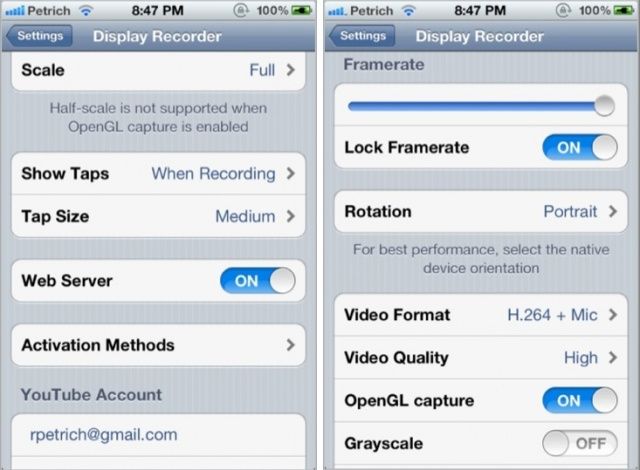 After recording a video in Display Recorder, the file is saved to your Camera Roll, and you can then share it via email or MMS, sync it to your computer, or upload it directly to YouTube.

Display Recorder is available from Cydia’s BigBoss repository, and it’s priced at $4.99. Existing users can get the latest update free of charge.