SAN FRANCISCO, MACWORLD/iWORLD 2013 – After you’ve brushed up on your iPhone photography skills and checked out the gadgets on the Expo floor, there’s still a few Apple-related things to do in San Francisco.

It’s a bit disappointing that the strip clubs have decided to stop offering their usual MacWorld free passes – and we don’t recommend you follow Apple maps to the Tenderloin to visit “My Butt,” either — but here are a few ideas.

1. Unlock The Power Of An Electric Scooter With Your iPhone

Scoot Networks is a electric two-wheel sharing startup where you unlock the vehicles by docking your iPhone. The fearless – and I say this as a reasonably intrepid Vespa jockey – can sign up for the service or just check out the vehicles at 5th and Market. Bonus tip: it’s in Mint Plaza, worth a teensy bit of shoe leather from Moscone for Blue Bottle Coffee, which serves up great breakfast far from the grunt and grind of the neighborhood.

2. Check Out A Musical About iPhone Obsessed Foodies

“Foodies! The Musical” is in its fifth straight month.

You’re not supposed to take photos during the show, but how could I resist? It was like snatching the last greasy fry from someone else’s plate: here’s the cast of the hit musical in a catchy number dedicated to the iPhone called something like “OMG!” Which is pretty much par for the course in a city where food truck and vegan-food finder apps are a viable thing.

3. Visit The Grounds Of The Next Apple Store 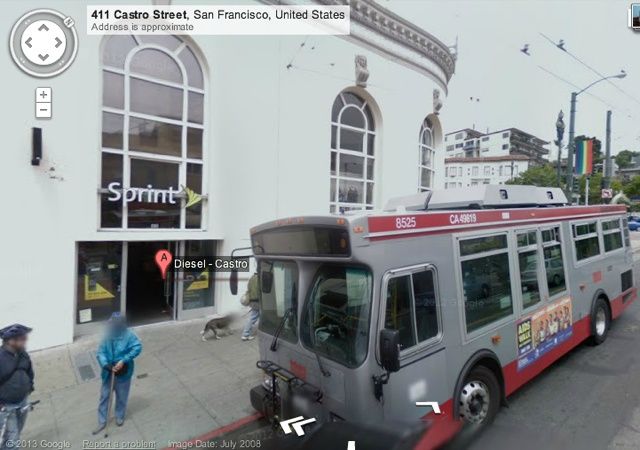 If the rumors are right, San Francisco’s newest Apple store will be taking over from Diesel at 400 Castro Street. Check out the historic corner locale now, while the neighborhood is still its freewheeling, clothes-optional self – San Francisco’s nudity ban comes into effect Sunday.

4. Try To Hitch A ride On The Apple Bus To Cupertino

We always include at least one stalker-y way to get close to Apple employees, whether it’s their favorite San Francisco bar or hangout close to the Cupertino campus in the hopes someone drunkenly drops a prototype into your sweaty, waiting hand. Here’s a new one: this beautiful map tells you where locals get on the company bus headed down the peninsula to the Cupertino mothership. If you get bounced, don’t tell them we sent you.

5. Pay For Your Double-Soy-Latte-Low-Foam On An iPad

San Francisco is a hotbed of coffee culture and Sightglass, South of Market at 270 7th Street, was the first place we ever spotted an iPhone employed as a cash register.

Don’t get your shots and dash, though. The place is a low-key neighborhood hangout especially for the folks who designed the Square iPad app running the register, their offices are just down the street.