iPhones and iPads aren’t the only products receiving some love from Apple today. Along with the surprise release of iOS 6.1, Apple just pushed out an update for the Apple TV as well.

The new Apple TV software version 5.2 can be downloaded right now. It includes a number of new features such as support for Bluetooth keyboards, iTunes’ Up Next feature, and iTunes in the Cloud.

The Up Next Feature is a new addition to the Apple TV that made its debut in iTunes 11. It allows users to queue up songs as music is playing so they can choose what will play next. The addition of Bluetooth support makes finding content much faster.

The new Apple TV software also exposed an unreleased device in the code, AppleTV3,2. It looks like it’s a minor update to the Apple TV 3 that some have speculated could be an Apple TV with an A6 chip.

Adding more processing power to the Apple TV, along with Bluetooth keyboards, could be enough for Apple to introduce games on the Apple TV in the near future. As of right now that’s pure speculation though, so I wouldn’t get my hopes up just yet. 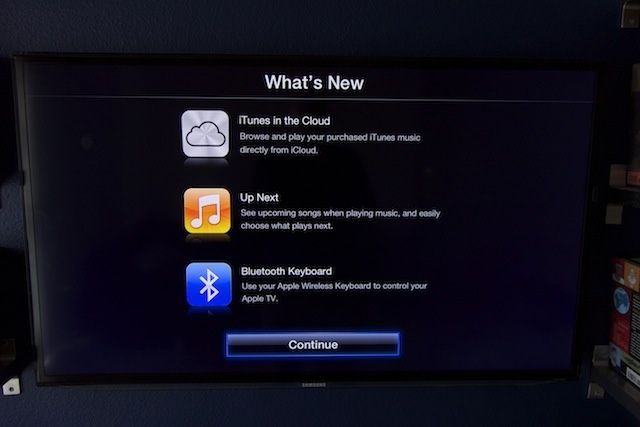 Number of comments on this postLeave a comment
Posted in: News Tagged: Apple TV, iOS, iTunes, up next