This is what I wrote earlier this month, strung out on CES and showing it at the edges:

“With irritating regularity, my girlfriend and I dance the same dance. She, or I, go to bed with our iPhones. She, or I, lose it somewhere within the ocean of the bedfolds. She, or I, find ourselves apoplectic. She, or I, demands that the other calls the phone to locate. And then she, or I, realize that we’ve lost our phone too. And then we murder each other into a spattering of bloody chunks in our festering rage, somehow to reconstitute ourselves, temporarily find our iPhones and begin this amphisbaena dance anew.”

The guys behind HipKey, a keychain dongle that can track your iPhone (and vice versa), were paying attention, and so they sent me over a unit for review. I’m not sure it’s revolutionized my life, but it sure has simplified it: now, instead of constantly worrying about misplacing my keys or my iPhone, I only have to worry about misplacing both at the same time. 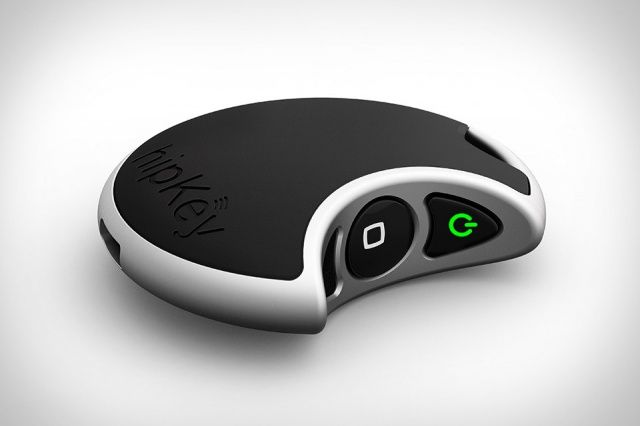 The idea behind the HipKey is simple. It’s a little fob that you can connect to your keychain (or your purse, or any other accessory that you generally don’t want to walk out of the house without) and which whispers over Bluetooth 4.0 low power mode with a paired iPhone. If the HipKey gets too far away from your iPhone, both the fob and your smartphone start freaking out.

There are a lot of cool ways to make use of your HipKey’s predilection for separation anxiety.

It might seem like a simple trick, but there’s a lot of neat ways in which the HipKey can use its own predilection towards separation anxiety to do useful things. The simplest, of course, is just by making sure that you don’t walk out your front door without both your keys and your iPhone in your pocket, but there are other options too. You can tell HipKey to freak out if it detects your iPhone or fob being moved, allowing you to — say — walk away from your desk without worrying about someone stealing your purse.

Or you can hand your HipKey to your kid in a crowded mall or supermarket and if the little rugrat wanders away too far, you’ll immediately be alerted and go hunting after the tyke. And, of course, you can force your HipKey to freak out just by pushing a button in either the official HipKey app or on the dongle itself, allowing you to track a pair of keys that have gone missing or an errant iPhone by sound.

The HipKey dongle itself resembles the iconic Apple logo, without the stem. It’s a crescenty plastic Pac-Man without a lot of flourishes; in fact, it looks like a car door opener.

Inside the concavity of the HipKey crescent, there’s a power button that is also used for pairing your HipKey over Bluetooth to your iPhone. Next to it is an iOS style “home button” replete with a round-corner rectangle in the middle. Hitting this sends an alert to your connected iPhone, telling it to sound an alarm. Finally, there’s a tiny speaker, and a micro-USB port for charging on the base.

The HipKey isn’t going to win any design awards for its appearance, but it’s supposed to look relatively unpresuming: it’s meant to go on a keychain.

The HipKey isn’t going to win any design awards for its appearance, it’s meant to go on a keychain.

To use the HipKey, you need to download a free iOS app. It’s not universal, so it won’t look very good on an iPad, and it also isn’t optimized for the iPhone 5, but the app is otherwise simple to use. Once paired with the HipKey dongle, a dial in the middle of the screen allows you to switch between modes (Alarm, Child or Motion), set the maximum distance the iPhone and HipKey can be from each other before they start calling out, and even set up a geofence around a custom defined ‘safe zone.’

You don’t want a device that is meant to help you find your iPhone or your keys in a hurry to be too complicated, and the HipKey keeps everything nicely Apple-like: once you pair your HipKey and your iPhone, things just work.

In our testing, the most useful mode was the simplest one: the ability to make your iPhone or keychain sound out an alert just by pressing a button. It’s a great time saver. I’m constantly throwing my keys somewhere I can’t remember, or losing my iPhone in the couch cushions: with the HipKey, if I can find just one of those objects, I can locate the other one within seconds by just listening for the errant object’s plaintive cries.

The HipKey has four main modes:

Next, there’s Alarm Mode. The point of Alarm Mode is simply to make sure that you never walk out the door without both your keys or your iPhone in your pocket. It works fine, but you need to use it in conjunction with the HipKey app’s ability to determine “Safe Zones,” or geofenced areas where the HipKey app will be a little more lax about the fob getting away from it.

For my use scenario, I didn’t find the Motion Mode or the Child Mode particularly useful, but I did test them. Motion Mode is pretty bare bones, but it works the way it is described on the tin, freaking out the moment you move your HipKey or your iPhone. As for Child Mode, the idea here is interesting. Switching to Child Mode, you can hand the HipKey fob to your kid, and the second there’s enough distance between your HipKey and your iPhone so that it can no longer stay connected via Bluetooth, an alarm will sound. Get within range of your kid again, and the alarm on both the fob and on your iPhone will stop, allowing you to track your child down in a busy store or event.

The performance is impressive, especially when it comes to battery life.

Overall, except for some of the slight twitchiness of the HipKey when you don’t give it a long enough leash and set up Safe Zones, I was really impressed with the performance, especially in an area that concerned me going in: battery life. I’d heard that Bluetooth 4.0 allowed for negligible power draw, but the HipKey was the first device I’ve tested that really put it to the test. I usually keep Bluetooth on my iPhone shut off for battery life, but even connected to the HipKey for the week, I saw negligible losses in battery life on my iPhone 5. As for the HipKey itself? After a week of testing, it’s still got 66% of its battery still charged.

The HipKey is a great gadget for the forgetful, the parent or the paranoid. Even for an addle-brained dimwit like me, the HipKey has virtually eliminated two of the biggest annoyances of my life: that moment of pocket slapping that happens when you suddenly realize you forgot your iPhone, and the irritating snipe hunt that occurs when you can’t find your keys or phone. All without absolutely killing your iPhone’s battery life.

The hardest thing to recommend about the HipKey for people like me, though, is the price. The HipKey costs $89.95 from the Apple Store, and that’s just a lot of money to spend to save yourself a few seconds of frustration. If you primarily want to use the HipKey to help you keep track of your kid, that might be worth the money, but if you’re just a little bit forgetful about where you left your iPhone, $90 is a lot to ask.