Apogee is the first name that pops into my head when I think “mobile, Mac-powered music-making studio.” Today, the company has revamped three of their user-friendly recording devices: the One, the Quartet and the Duet, upgrading their capabilities and making them all iPad-compatible.

The battery-powered One microphone has three input options — a built-in condenser mic, and XLR input and a 1/4-inch jack — and now has the ability to record simultaneously from two of those inputs (though one of those inputs must be the 1/4-inch jack). The gadget also doubles as a digital-audio converter, but prior to the new version the DAC only added sparkle to music played via a Mac; now the One will work with iOS devices too. Available in March for $350.

Then there’s the Duet, a powerful MIDI input/output device that can now plug into an iPad as well as a Mac. The Duet works with most serious iPad music-creation apps like GarageBand, or Apogee’s own Maestro, which has yet to hit the App Store. Available in February for $595.

Finally, Apogee has added 30-pin cable-compatibility to its $1295 Quartet, a beautiful brute of a device, with four-inputs and eight-outputs. The updated Quartet will be available in February.

Note that all these guys require the Lightning adapter to work with new iDevices. 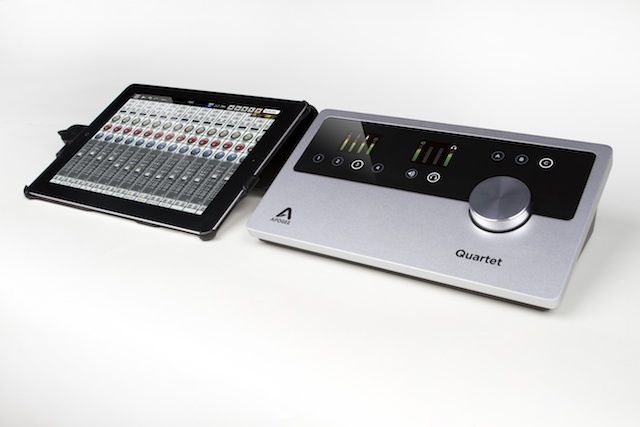