The first Microsoft Surface RT tablets were supposed to be Redmond’s answer to the iPad. They have a cool design, with a fancy keyboard and an innovative new operating system to boot. Sales have been abysmal. The reviews were bad. And we weren’t too impressed either.

If you think the Surface Pro is worth the $899, then get ready to stand in line on the February 9th launch date with all the other Microsoft fans. If you’re still not sold on the value of a Microsoft Surface Pro, Anantech put together this handy little chart comparing the Surface Pro and Surface RT to the iPad 4: 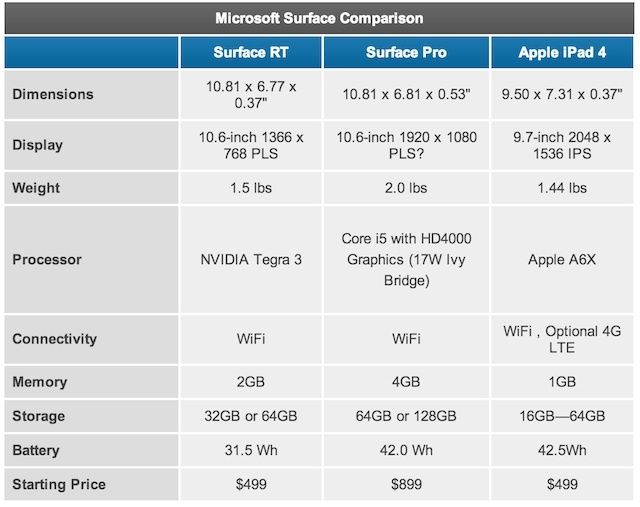 Having full Windows 8 onboard should make a huge difference for users who hope to replace their Windows laptop with a Surface Pro. While a lot of sites on the Internet claim that the Surface Pro is an iPad-killer, it’s really positioned more to compete with the MacBook Air. Microsoft will need to do a lot of marketing to let people know that it’s more of a laptop than a tablet, but with that crummy keyboard, we can’t see why you’d want a Surface over a touchscreen Ultrabook.