Mac users seem split on whether Mac OS X’s Dashboard is the Best Thing Ever or a mildly irritating component that’s accidentally accessed when fingers stray on to a function key. Opinion appears to be drifting towards the latter option, but there are a few Dashboard widgets that are staggeringly useful.

For some, the Dashboard mechanism itself is the main barrier to working with widgets. Although Vista didn’t win fans by grabbing a chunk of desktop space for its Dashboard wannabe, having the option for widgets to remain on-screen would doubtless be handy for many Mac users, and it’s this functionality that shareware application Amnesty Singles provides.

The interface is pretty much idiot-proof. You drag a widget from Finder to the whopping great arrow in its sole window, decide whether you want to create a standalone bundle or an application with a dependency on the original widget (as in, nuke the original and your Amnesty application won’t work), and click ‘Build’. Once Amnesty Singles does its thing, your app will be sitting wherever you saved it, ready for use.

When the application is launched, it should work like the original widget, but free from Dashboard. (Quick caveat: not every widget we tried worked and a few simply aren’t suited to being outside Dashboard; most, however, work fine.) Using your new application’s menus, you can force it to desktop or ‘on top’ level, along with defining a refresh rate. With some widgets being more akin to mini-applications, chances are you’ll get more use from them in this form than if they were hidden behind F12 (or F4 if you’ve a shiny new Apple keyboard).

Mac OS X ninjas will no doubt start bellyaching that Amnesty Singles doesn’t really offer anything you can’t do yourself. And, yes, if you’re keen to muck about with Terminal, you can toggle Dashboard’s dev mode and detach widgets from Dashboard. However, you don’t get the flexibility that Amnesty offers, nor the ability to hide and quit widgets like regular apps, nor the ease of use. 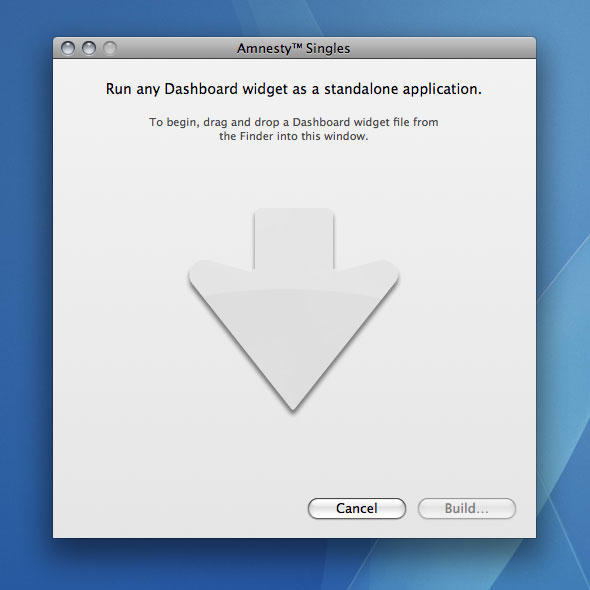 If you can’t figure out how Amnesty Singles works, there’s really no hope for you. 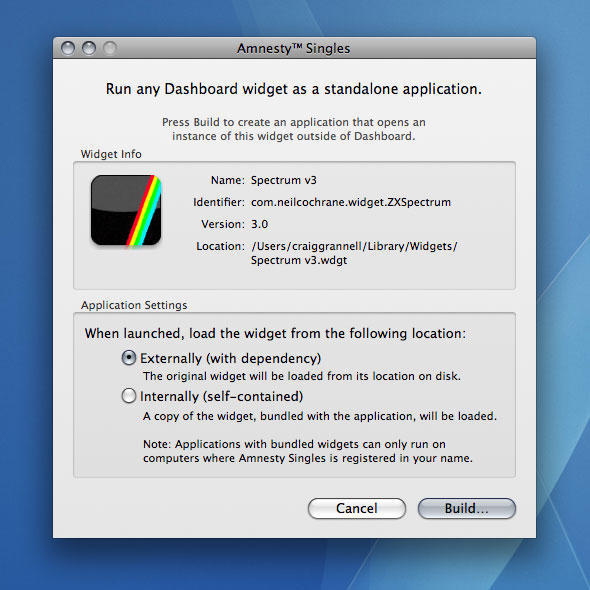 Amnesty applications can be created as standalones or by loading the widget from disk.