LAS VEGAS — The Rio casino is using iPads to do what casinos do: get visitors drunk and lose money gambling.

Located just off the bustling Vegas strip, the Rio casino has a team of “Beverage Ambassadors,” who wander the casino floor with iPads taking drink orders.

The system has been in place a year now, and it’s so successful, the casino is wondering why the other Vegas gaming joints haven’t copied it.

Here’s how it works:

I checked in with Spense, a handsome and outgoing Beverage Ambassador who filled me in on how it works.

Patrons playing slots or sitting at the card tables are approached by a Beverage Ambassador, who takes their drink orders on the iPad.

The ordering app is very specific, listing the type of drink and the exact ingredients and preferences (neat or on the rocks, etc.). Spense showed a coffee order. After selecting coffee, options of cream and sugar appeared.

The iPad sends the order directly to the bartender, who makes the drink. Then a server called a “Bevertainer” (beverage entertainer) brings the drink out to the customer (the tables and slots are all individually numbered, making this easy).

In addition to serving drinks, the Bevertainer also performs a quick song and dance on a nearby stage every hour. Pretty sweet.

According to Spense, the system is much quicker and more efficient than waiting for a haggard waitress in high heels to bring your drink 15 minutes after you ordered it (and by which time you’ve already lost your money.) 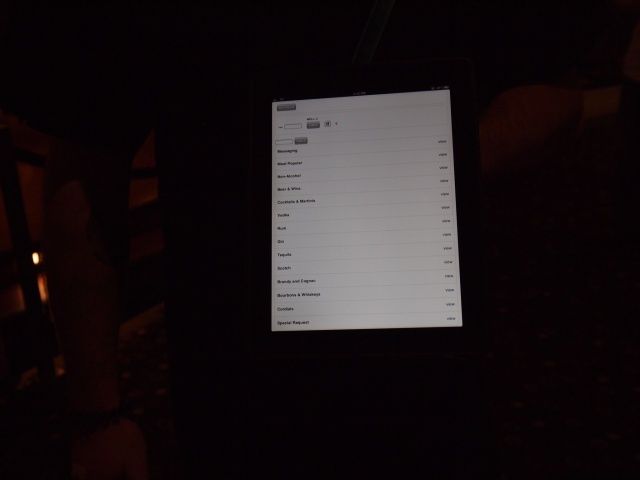 It’s funny that an off-strip and somewhat tatty casino would embrace technology with such gusto but that’s exactly what it has done. A year after the program launched, the iPads have improved business, the casino says.

Spense was enthusiastic about the system. He is assigned an iPad every shift, which he is responsible for.

Luckily he has never destroyed one. When I asked him if he had spilled beverages on it, he reminded me that he doesn’t deal with drinks, he just takes the orders.

Not only does the iPad make the drinks arrive quicker, it also improves customer service. Spense has more time to mingle and get to know the customers. Many come back to the Rio and and ask about their favorite Ambassadors or gamble where they are stationed.

Spense said he’s puzzled why the other casinos in Vegas don’t use iPads the same way, especially when it has proven to be effective. The Rio is blowing the other casinos out of water, he says. He suspects that the extra expense of hiring Beverage Ambassadors may be off putting.

But a happy drunk gambler is always a casino’s best friend.