This year, we here at Cult of Mac decided we wanted to give our readers their very own Apple-themed advent calendar, filled with the year’s best apps, gadgets, stories and other curios. So each day in December, we’re going to lovingly peel back the door on the Cult of Mac 2012 Advent Calendar to reveal another delicious morsel, something really special that came out this year that we think every one of you should enjoy.

Hiding behind door number 24 is a little game that will help you extract revenge upon all your family members and friends. It’s Hero Academy. 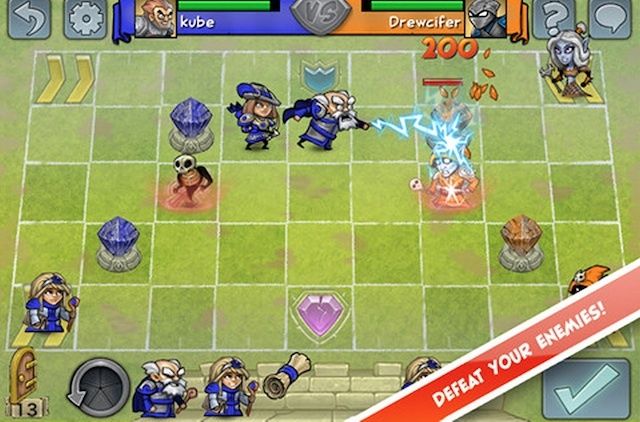 There were a lot of great new games that came out in 2012, but one of my favorites was Hero Academy. I loved to play chess as a kid, and playing Hero Academy is sort of like playing chess, except each piece of the board can literally eviscerate your opponent’s pieces.

The idea of Hero Academy is simple: on a small, chessboard-like battlefield, you use your team of miniature heroes to either A) destroy your opponents power crystals, or B) kill all of your opponents heroes. Whichever player is the first to accomplish either A or B wins. I usually ignore the power crystals and try to wipe my opponent’s team off the map because it’s more exciting that way.

One of the funnest aspects of Hero Academy is that the Robot Entertainment developers are constantly adding new sets of heroes to choose from. Right now you can choose Council, Dark Elves, Dwarves, The Tribe, Shaolin, and even the heroes from Team Fortress 2. Each team has different abilities that others don’t have, so it makes games interesting when your team fights a different type of team.

Deputy Editor John Brownlee and I have battled each other on Hero Academy throughout the year – with me getting dominated in a vast majority or the battles. The game requires patience and strategy, but also a little bit of luck as you don’t get to choose which heroes and power-ups are available to you.

You can play Hero Academy on both iOS or Mac for free, which is another reason why it’s such a great game. Its only weakness is that you have to play against another real person as there’s no computer opponent, so a single game can last for days while you and your opponent wait for each other to make a move. But if you’ve got some family members in town for the holidays, smashing each other to bits in Hero Academy is a great way to spend quality time together.