Netflix video streaming remains one of the largest sources of peak downstream Internet traffic in the US. With over 1 billion hours of Netflix being watched per month, it’s safe to say they have a pretty good idea of the strains their service puts on ISPs. In fact, Netflix has been keeping tabs and gauging these ISPs to see just how well they perform.

Starting today, Netflix will begin to publish a monthly ranking for consumers to get a better idea of what kind of real world performance and streaming speeds they can expect.

Rankings are complete with Rank, Change, ISP Name, and Average Speeds (gauged in what appears to be Megabytes per second).

In the first set of rankings (November 2012) you’ll find none other than Google Fiber at the top of the list. While Google Fiber shows a marginal lead, it’s a bit puzzling to see such a low number from a service that boasts speeds of 1GB down/up. It’s possible that the Google Fiber average is simply the cutoff point that Netflix supports, but your guess is as good as ours.

Now, before you go blasting off your LTE speeds, remember: this is the average of all usage, including 3G users.

Netflix also makes sure to point out that:

The average performance is well below the peak performance due to a variety of factors including home Wi-Fi, a variety of devices, and a variety of encodes. The relative ranking, however, should be an accurate indicator of relative bandwidth typically experienced across all users, homes, and applications.

So how does your ISP rank? Check below for the full list and remember to check back each month to see how they’ve improved or declined. 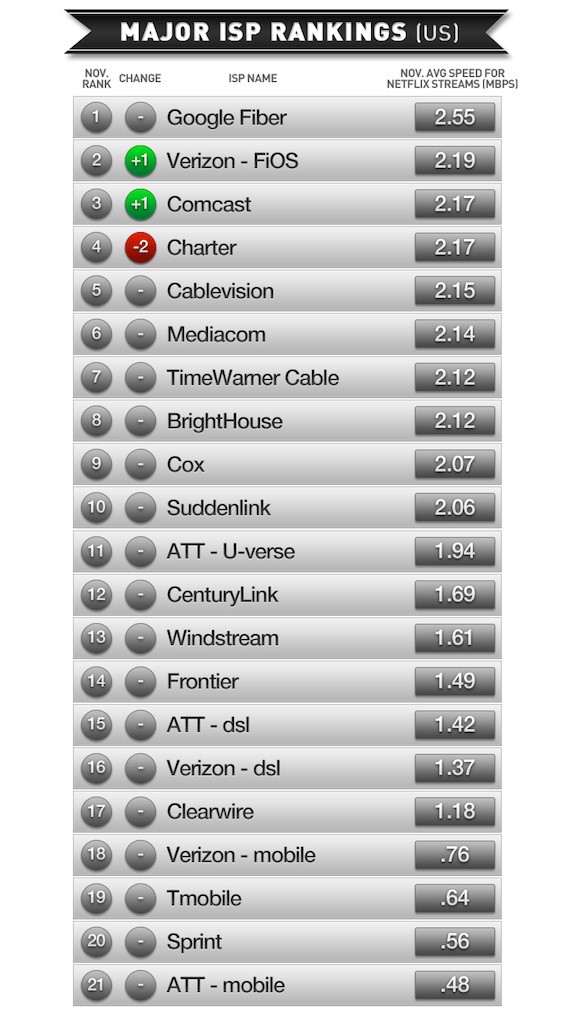