The short form: Zagg’s Pro Plus has got to be the best compact iPad keyboard I have used (and I have used a lot). It is also backlit, incredibly light and doubles as an iPad case.

But it has one fatal flaw – your iPad 3 or later will probably fall out.

First up, the description. The Zagg is an aluminum tray the same size and shape as the iPad, and when you put them face to face they form a sleek, everything-proof shell, stuck together with magnets. You can toss this in your bag without worrying about the iPad’s screen or the ZAGG’s keys.

Opening is done via the little cutout at the front, just like a MacBook, and the magnets will wake the iPad for you.

You get a full keyboard, with two-full sized shift keys, a dedicated media/iPad row of keys, a proper on-off switch, a pairing button, plus a battery check and a switch for the keyboard backlight.

To switch on the keyboard you press this key (to the right of the spacebar) once. Press again to select brightness levels, and press in combo with the left/right arrow keys to switch colors.

The keys are fantastic. They are crisp and positive, just like the Apple keyboards, and they are made with a soft-touch plastic which seems luxurious to the fingertips (but which is regular hard plastic if you tap them with a fingernail).

I still prefer a larger keyboard if possible, but I never feel cramped on the ProPlus, just like I can sleep in any hotel bed but prefer to stretch out in my satin-sheeted, heart-shaped kingsize Playboy bed at home.

The case is also light. It weighs 404 grams on my kitchen scales. For comparison, Apple’s Bluetooth keyboard weighs 324 grams, the leather Smart Cover weighs 140 grams and the Incase Origami Workstation is 210.

If you do the math, you’ll see that the ZAGG is just about the lightest option as it is both keyboard and case. Even the Apple keyboard paired with the Smart Cover is heavier (464 grams in total). In practice, the package of iPad and ZAGG cover is light enough to schlep around and not notice the weight. 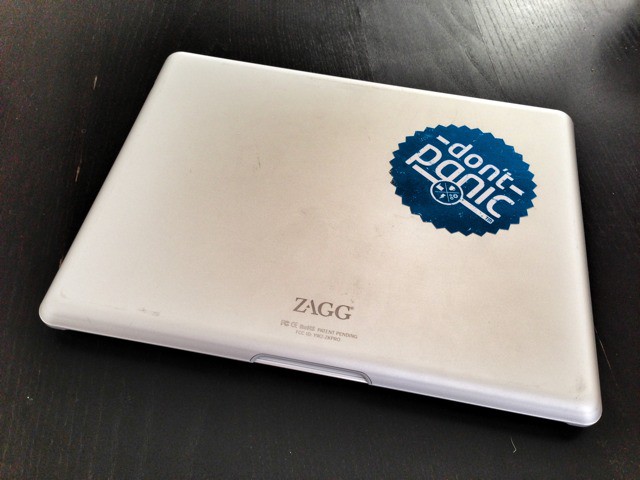 The dedicated on/off switch is also great. It can’t be switched on accidentally like Apple’s own (which – to be fair – was designed for desktop use), and it tells you at a glance whether the keyboard is powered on or not.

And the backlight? It’s great, if that’s what you need. The colors are a nice touch, but reset to purple every time you cycle the power, and the light bleeds from under the keys instead of lighting up the numerals on top. It’ll get you by, but it’s not an elegant solution. 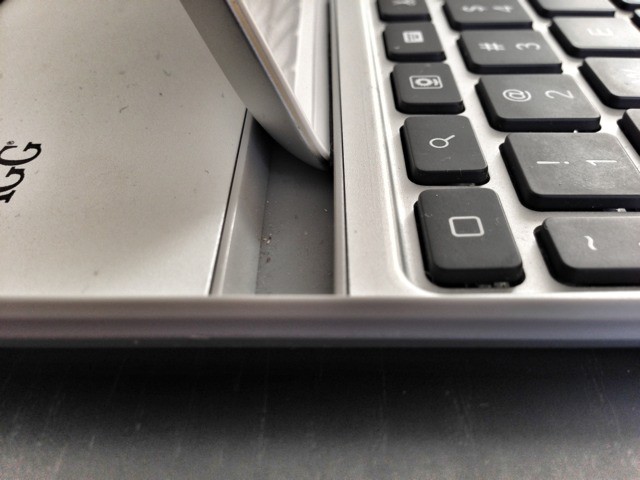 Let’s start with the big problem. If you have an iPad 3 or 4, then it will fall out of this keyboard’s slot. ZAGG sent me a second review unit after I told them about this, and it was exactly the same as the first. I held off this review as I’d heard nothing from anywhere else, but today a reader emailed me to say he was having the same problem.

The angled slot that holds the keyboard upright is made from hard plastic. An iPad 2 is rock-solid in there, in landscape or portrait orientations. An iPad 3, though, is too fat, and can’t lean back enough to have its lower edge engage with the front lip.

What this means in practice is that if you put the iPad in and let go, it falls out backwards. You can fix it by gluing a thin rubber strip to the front lip’s inside edge, but the reult is still precarious.

Which is a shame, as this keyboard is otherwise almost perfect. I have actually taken to using it anyway, and tossing my PadPivot stand into my bag to actually prop the iPad up. This allows a better angle and a more comfortable distance, but obviously doesn’t work on the lap. 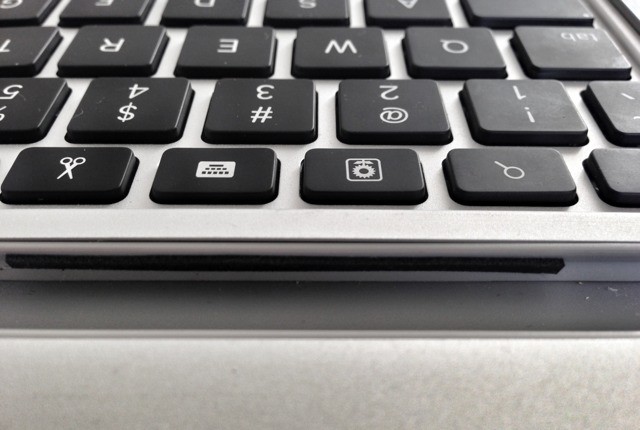 Another annoyance is the lack of screen-brightness keys – instead you get useless cut/copy/paste keys, functions duplicated by regular keyboard shortcuts that anyone dropping $130 on an iPad keyboard will certainly be familiar with.

The Bluetooth pairing button also seems somewhat redundant. I’m likely to pair this thing once for each iPad I buy, but I will be switching the backlight on and off far more often. And yet the backlight instead takes up what could be a right command or option key.

If you have an iPAd 2, then you should totally buy this keyboard. It’s mechanically excellent, it looks good and it’s both light and tough. If you have an iPad 3 or 4 and want to use it on your lap, then look elsewhere, or be prepared to hack this one to work with your tablet.