If you’re an AT&T iPhone customer living in Pennsylvania, you may have woken up this morning to discover your handset had been inhabited by a mysterious being known only as “Dan.” He lives inside your iPhone and comes out when you’re asleep. While he’s awake, the AT&T name in your status bar changes to “Dan” — but it usually changes back before you get a chance to catch him.

Scary, isn’t it? Fortunately, that’s not true. Your iPhone isn’t inhabited by an unknown being that forgot to disappear before you woke up; it’s just a glitch on AT&T’s network that’s affecting users in Pennsylvania.

PennLive.com is reporting that both Apple and AT&T are aware of the issue, which only seems to be affecting users in the 717 area code with the iPhone 3G, iPhone 3GS, and iPhone 4. AT&T says it’s nothing to worry about, and that it’s working to fix it. 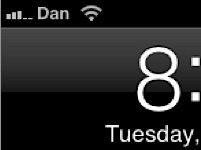 “Some people have had success by resetting the original network settings,” the report notes, “but others have had to replace SIM cards or have AT&T ‘ping’ the phones when they are turned off.” Plenty of customers have taken to Twitter to complain about the problem.

It’s unclear what caused the issue, but it sounds to me like a hilarious practical joke from an unhappy employee named Dan.