This year, we here at Cult Of Mac decided we wanted to give our readers their very own Apple-themed advent calendar, filled with the year’s best apps, gadgets, stories and other curios. So each day in December, we’re going to lovingly peel back the door on the Cult Of Mac 2012 Advent Calendar to reveal another delicious morsel, something really special that came out this year that we think every one of you should enjoy.

What’s on the other side of the door for Day 3? It’s Jasmine, an exquisitely designed, utterly beautiful app that will make you rediscover how cool YouTube can really be. 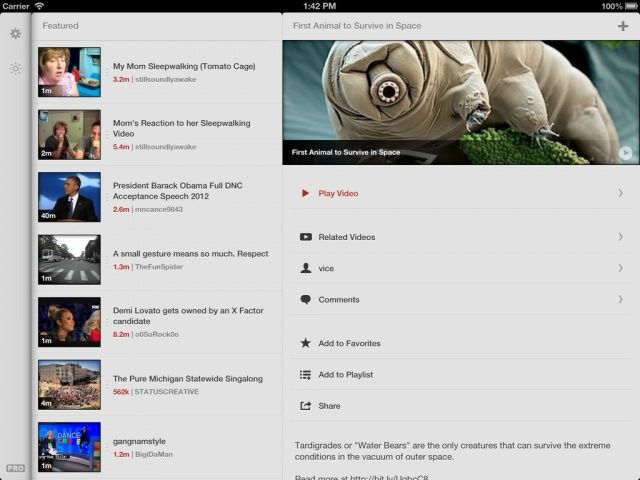 Jasmine changed all of that for me when it was released a couple of months ago. It boasts an impressive feature list and a superlative sense of design. But instead of talking about how beautiful it is, how well-animated and thought-out it is, let’s talk about what makes Jasmine truly unique: its quality of lightness.

What Jasmine recognizes is that the best services let us lose ourselves in a stream of wonderful things, and the best apps for those services are largely invisible. Jasmine is designed like a crystal boat floating down that stream. Its deck is clean, its lines are pretty and it steers easy, but it’s also transparent, fading into the current and letting you wash away.

What’s so great about Jasmine, to me, is how it allowed me to re-experience YouTube as a destination in and of itself. When YouTube first appeared on the internet back in 2005, I used to spend hours just browsing through videos randomly, endlessly discovering new and great things. Now, though, I never go to YouTube. Instead, all of the YouTube videos I watch are pre-curated by blogs or Twitter, embedded on Facebook or on Tumblr.

Jasmine has changed that for me. I’ll load up Jasmine, type in a search term, and then just surf from video to video. All of the ugliest aspects of YouTube — especially the howling id of its so-called “community” — are downplayed, and the videos and the way they interlink with one another are brought to the forefront. It’s brilliant.

It’s no surprise that Jasmine is so good: it was created by Jason Morissey, who also designed the popular Alien Blue Reddit app.

In his announcement post, Morissey said that “it’s a far lighter project than Alien Blue and doesn’t carry a lot of bells and whistles, but it may serve as a simple alternative.” Morissey was being too modest. Jasmine isn’t just a simple alternative to Google’s official YouTube app, or the execrable built-in app of the pre-iOS 6 days. It’s an app that recaptures the spirit of exploration and discovery that made YouTube great originally, long before Google bought it up and tried to transform it into another half-breed social network of the post-Facebook age. Jasmine is what YouTube’s official iOS app would be if the service had stayed true to its roots. It’s a beautiful thing, and one of the best apps to come out in 2012.

If you haven’t downloaded it already, you can grab Jasmine for free here.