There are almost no iPhone 5 docks available right now, and that’s for two reasons. One is that Apple has only just let manufacturers start including the new Lightning connector in their products. The other is that the new iPhone has only been around for like five minutes.

Braeburn has managed to get around the former problem by asking you to use your own Lightning cable, and the latter by, well — who knows? By being smart and hard-working I guess.

I have been using the aluminum dock for the past week, and it turns out to be pretty neat, although it won’t be for everyone.

The Braeburn Acoustic Dock is an aluminum block machined to channel and grip a lightning cable, whilst also channeling the sound to and from mic and speaker. It thusly acts not only as a sturdy charging station but also as a mini amplifier and hands-free call-box. 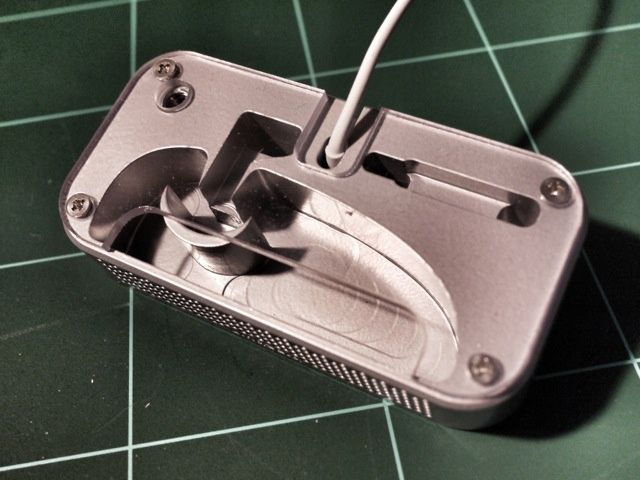 The setup is dead easy. You thread your Lightning cable through the hole (from bottom to top) and then give it a 90˚ turn before tightening the little grub-screw to keep it in place. The channel is shaped to stop the cable from being pushed out, so in theory the screw is only there to keep the cable in the dock when you remove your iPhone.

In the pack are a mystery second screw (shorter), a sticky pad with cutouts to act as a cushion for your iPhone, and an adhesive pad so you csan stick the dock to your desk for true one-handed iPhone-extraction.

The hand-machined dock is super well made. The colored versions are powder-coated, and the raw aluminum version looks especially good below the white iPhone. It’s stable, it keeps the iPhone upright, and the adjustable Lightning connector means that it will work with any case you have, no matter how thick it might be. 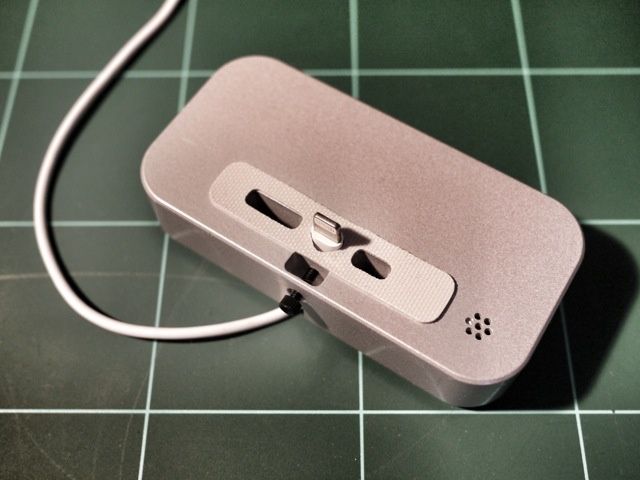 The speaker also works well. It is a little harsh-sounding for music, but for podcasts and phone calls it’s ideal. It really does make the sound quite a lot louder.

Two things stand out. The first is that you’re stuck with a vertical phone. The lack of any angle means that your iPhone will rest perpendicular to the tabletop. This makes it almost impossible to actually use while docked, but isn’t a problem if you use it as a nightstand charger or some-such.

The second is that the mic channel seems to confound Siri. I get a pretty good hit rate with Siri on both my iPhone and iPad, but when the iPhone is docked it’s like my virtual assistant hit the cooking wine: He has trouble understanding even the simplest requests. 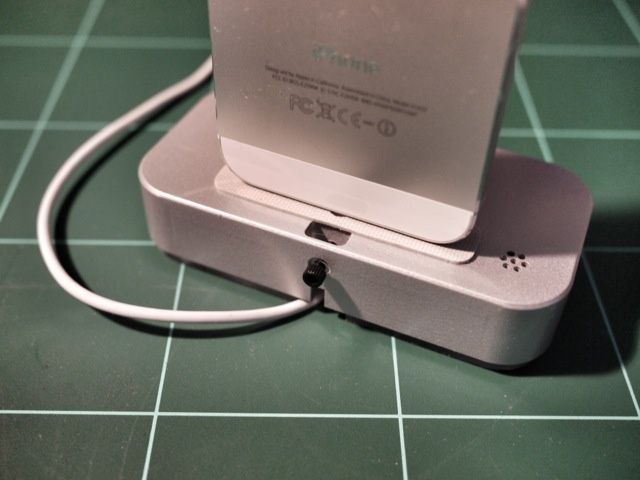 For $25, it’s hard to find fault with the Braeburn. It supports the iPhone, it charges it, and it has some very neat built-in extras. It’ll also last your forever (even if Apple changes its connector again, I guess). If you want a dock that will support your iPhone while you use it, or that will pipe sound out to a stereo or even let you use an IR remote, you might be better off waiting for more docks to become available.

In short, the Braeburn does what it says it does, and it does it very well.