Although Hurricane Sandy passed through the Northeastern United States on Monday, the aftermath is still being felt three days later. Not only is New York City still flooded and thousands still without power and electricity in many states, but FedEx and UPS are still experiencing disruptions to their delivery services.

What does this mean? If you live in Connecticut, Delaware, Maine, Maryland, Massachusetts, New Hampshire, North Carolina, Pennsylvania, Rhode Island, Vermont, Virginia, Washington, D.C., or West VirginiaJersey, there’s a chance your iPad mini preorder won’t get delivered to you tomorrow. And if you live in New York or New Jersey? It’s pretty much a certainty you won’t get it.

Both FedEx and UPS are reporting interruptions in their operations leading to unavoidable service delays in a number of states in the aftermath of Hurricane Sandy.

Right now, though, it’s especially bad in New York and New Jersey, where UPS and FedEx are both saying that they aren’t making any deliveries to the following ZIP codes: 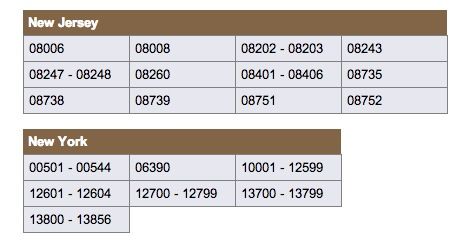 It’s possible that FedEx and UPS will commence delivering later today or tomorrow, but there’s a lot of backlog at this point. If you live in New York or New Jersey, it’s probably unlikely that you’re going to get your iPad mini tomorrow. In other states, the biggest determining factor as to whether or not you’ll get your iPad mini preorder in the mail is probably whether or not you’re already getting mail delivered to you.