Back in September, we reported that Valve had created a special interface to let Steam gamers play on the big screen with a controller. At that time the PC version of Steam was enabled for what it calls Big Picture, but today, one of our readers noticed that the Mac beta is finally available. 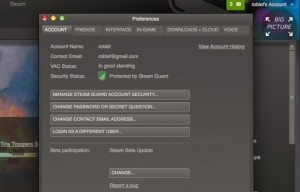 To enable Big Picture on your Mac, launch Steam, then open the Preferences, either from the Apple menu or by hitting Command-Comma on your keyboard. The tab in the top left, Account, is the one you want. Click on the Change Beta Participation button about halfway down the preferences window and choose Steam Beta Update. Steam may need to relaunch, and once it does, you’ll see the Big Picture button in the upper right of the Steam client window. Click it to go into controller mode.

I took it for a spin today and it definitely looks usable right on the Mac itself with an attached controller or a mouse interface. I haven’t hooked up a controller, yet, needing a wired one (I only have wireless Xbox 360 controllers), but the interface looks like a Steam-flavored version of the Xbox Dashboard, complete with game preview rectangles and a horizontally scrolling interface.

If you’re running Mountain Lion and have an Apple TV, you can AirPlay your Mac screen up to your HDTV, and sit in your living room to play Steam games from the comfort of your couch.