With Halloween almost upon us, what better way to celebrate than to scare yourself silly with some of the most terrifying games the App Store has to offer? We’ve put together a selection of the best horror titles that will have you watching your back this October 31, with some big hits like Walking Dead, Rage HD, Dead Space, and more.

Walking Dead is a five-part episodic game series set in the same universe as Robert Kirkman’s award-winning comic books. But it’s not just another zombie shoot ’em up; it’s a game that “explores some very dark psychological places, revealing that the undead are not the only thing to be afraid of when society crumbles.”

The title offers a brand new story in which your are Lee Everett, a man who’s been given a second chance at life in a world devastated by the undead. Your focus is on survival, and protecting a young orphaned girl called Clementine from the bloodthirsty zombies that are ready finish off the remaining survivors.

You’ll be forced to act fast and make split-second decisions; there’s no time to ponder when the undead are breathing down your neck. But be careful: the decisions you make in each episode will directly affect how your story plays out across the entire series.

Each episode is priced at $4.99, and once you’ve played the first, you’ll be itching to continue with the series. 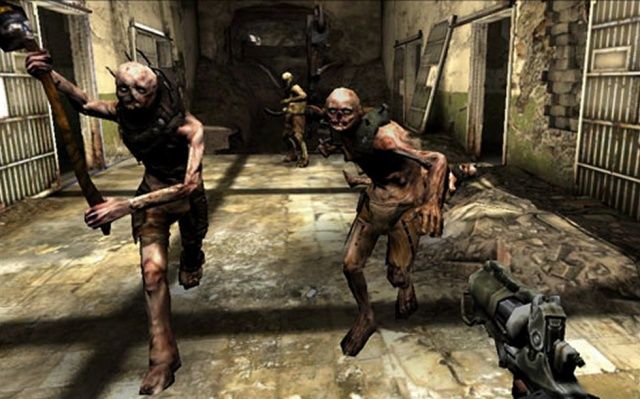 In this intense and incredibly creepy first-person rail shooter, you’re the star of a post-apocalyptic game show called Mutant Bash TV, in which you’re stalked by hungry mutants desperate to feast on your corpse.

Scour three pulse-pounding levels in search of ammo and cash pick-ups — armed with a pistol, shotgun or machine gun — and battle your way through the mutant-infested carnage. Featuring impressive, high-resolution graphics coupled with dynamic music and sound effects, you’ll probably want to play Rage with the light on.

At $1.99, with support for both the iPhone and iPad, Rage is a bargain for any FPS fan. 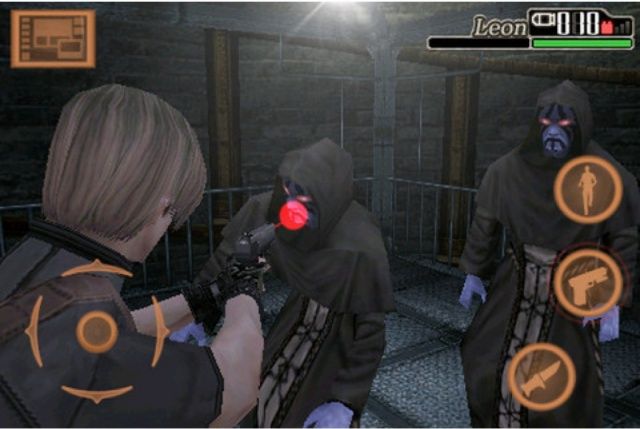 Resident Evil 4 is one of the scariest games I’ve played on a console, and it’s just as terrifying on iPhone and iPad. This title contains the complete Resident Evil 4 saga, “the game that changed survival horror for ever.”

Set six years after the destruction of Raccoon City, the game sees you playing Leon S. Kennedy, a U.S. agent who’s on a mission to rescue Ashley Graham, the President’s daughter. Along the way you’ll encounter a hordes of unruly villagers who have pledged their lives to Los Illuminados, the cult that perpetrated Ashley’s kidnapping.

You’ve likely already heard of Dead Space, it’s one of EA’s most popular shooters. But if you don’t already have it on iOS, now’s the time to pick it up and scare yourself silly for Halloween.

The title takes place three years after the destruction of Marker in the first Dead Space story, and it sets the stage for Dead Space 2. You find yourself on a mission of uncertain purpose in the Mines of Titan, and soon, the truth of your situation will become grotesquely clear in a brand new storyline exclusively for the App Store.

Boasting a wholly original and terrifying experience splattered in deep gameplay, outstanding graphics, and a chilling soundtrack, Dead Space is an absolute must for any fan of intense action games.

As a big Call of Duty fan, this is a personal favorite of mine. Like its predecessor, Call of Duty: Black Ops Zombies pits you against the undead, either alone or in a team of 4 with your friends. It boasts maps and weapons never before seen on a mobile device, and a chilling zombie-killing experience that will require you to watch your back at all times.

What’s great about this release is the addition of Dead-Ops Arcade, a 50-level arcade-style, top-down shooter that was hidden within the Black Ops console release.

First brought to iOS back in 2009, Silent Hill is getting a little old now. But it’s still one of the most thrilling horror titles the App Store has to offer. Under the guidance of a flickering flashlight, your aim is to find the exit to the labyrinth in which you’re trapped. The problem is, that labyrinth is filled with terrifying creatures, and you’ve only got so many bullets in your gun.

N.Y. Zombies 2 is the sequel to Foursaken Media’s awesome N.Y. Zombies. It looks better, it sounds better, and it plays better than the original. Set in New York City, like its predecessor, the game puts you into a world inhabited by zombies, where your friends, family, colleagues, and everyone else you once knew is now dead.

Your mission is simple: survive in this hostile world by killing hordes of the undead with a massive arsenal of weapons. You’ll fight in famous locations like Times Square and Central Park as you attempt to find out what happened to your world. There are multiple game modes to enjoy — including a great 3-player co-operative mode — and three different skill paths.

While the original Doom wasn’t all that scary, Doom Resurrection for iPhone is darn frightening. It’s an awesome first-person shooter based in a remote research facility on Mars, where scientists have lost control of their experiment and all hell has broken loose.

As the last surviving marine, you must defeat the minions before they attempt to take out Earth. You’ll utilize an arsenal of devastating weapons, including rifles, shotguns, and a vicious chainsaw (my favorite) in this all-new chapter of the Doom saga that’s designed exclusively for iOS.