This week’s must-have apps roundup includes two classic console games that have been reborn on iOS, including Sega’s hugely enjoyable Crazy Taxi, and Acclaim’s 1999 classic Re-Volt — both of which first made their debut on the Dreamcast. It also includes a great little action platformer called Ivy The Kiwi?, a wonderful puzzle game called Girls Like Robots, and more.

Sega arcade classic Crazy Taxi is finally available on iOS,  and it’s an exact port of the original Dreamcast hit — with the original (and awesome!) soundtrack by Offspring and Bad Religion.

In Crazy Taxi, time is money, and only the craziest cabbies come out victorious. Pick up customers and get them to their destination as quickly as possible. The more stunts and near misses you pull off on the way, the more you’ll earn.

Crazy Taxi boasts multiple game modes, including 3, 5, or 10 minute arcade modes; 16 mini games; Game Center achievements; and more. What’s more, you can choose to listen to music from your iPod library in-game — though I’m not sure why you’d want to.

Ivy The Kiwi? is a “complex and authentic action platformer” that originally made its debut on the Nintendo 3DS. You join Ivy — a newborn kiwi — on her big adventure as she dashes across the pages of an antique story book in an effort to find her mother.

Ivy can’t fly on her own, so you’ll need to guide her through each by using vines to toss her into the air. There are 50 stages in total, plus “extra games” once you’ve completes those, and collectable red feathers you must find in each one.

E.T. celebrates its 30th anniversary with a brand new iOS game called The Green Planet, which is… a farming sim set in space?! That’s right — you return to E.T.’s dying home planet, then help him save it by creating “enchanted gardens full of intergalactic plant life.”

With the help of E.T.’s wise teacher, Botanicus, and an army of Micro Tech workers, you will cultivate the land, sow seeds, nurture plants, build structures, and develop the most astounding planet in the universe.

It sounds crazy — and it is — but it’s also a whole lot of fun, and incredibly addictive; one you start building your planet, you won’t be able to stop. 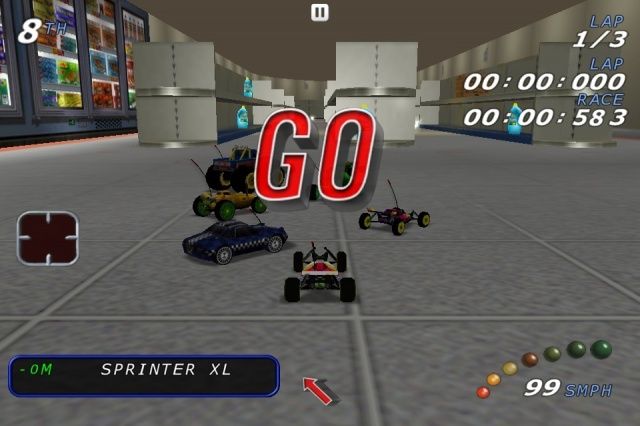 Re-Volt Classic is an exact port of the original game released on the PC and Sega Dreamcast back in 1999, only it’s been visually optimized to look great on Retina display devices, and adapted for the touchscreen.

It boasts “fast paced, exciting driving, with explosive weapons and unique track designs [that] deliver a larger than life racing experience like no other.” There are 14 tracks for you to enjoy, set in suburban streets and gardens, in museums and cruise ships, on rooftops, and even in a Wild West ghost town.

You’ll be able to choose from a massive selection of 42 different R/C cars, all of which have their own unique attributes: Some are powered by electric, others by gas; some are fast, others are slow; some are heavy, others are light. And thanks to Re-Volt’s advanced physics, each car feels completely different to drive.

In addition to five different game modes — including championship and single race modes, time trials against the clock, a stunt arena, and a practice mode — Re-Volt offers sharp Retina display visuals, and support for the iPhone 5’s larger 4-inch display.

Girls Like Robots is an awesome new puzzle game from Adult Swim — the developers behind Super Monsters Ate My Condo and Robot Unicorn Attack — about “love and seating arrangements.”

All you really need to know is that girls like robots. And robots like girls. Just don’t surround robots with girls; it makes them freak out. Also: nerds like girls and robots, but girls don’t like nerds. Everyone likes pies, unless they are a robot. Or on fire. Got it? Additionally, robots with mustaches don’t care for June. June, on the other hand, likes bugs. And Ben likes June so he asked her to dance. But here was this volcano and lasers and not the dance might be cancelled.

Confused? Actually, Girls Like Robots is pretty simple — it’s a tile-based game in which you place girls, robots, nerds, and more next to each other, trying to ensure that they’re happy where they are. There are more than 100 puzzles to solve, and it gets you hooked. You can also earn Game Center achievements, and climb the global leaderboards.