Text editor groupies of the world, gather round. I have something new to show you.

Clean Writer Pro is a newcomer to the OS X text scene, and offers a lot of the basics for a very good price: and right now, it’s on sale for a dollar.

CWP is a small and fast plain text editor. It’s not well suited to coding, but more aimed at writers. I’d hesitate to call it feature-packed, because there are many features it’s missing in comparison to other apps in the same space. But that doesn’t mean it isn’t any good. In fact, I rather like it.

The display options are minimal. You only get four color schemes in the app, and no way to edit them. Personally, I think the four provided are plenty. One nice addition is “paragraph fade mode,” which fades all text except for the paragraph you’re currently working on. You might read that and think “They got that from iA Writer,” and perhaps that’s true; Clean Writer Pro includes a lot of functions you might have seen in other text editors. But what it leaves out is just as important as what it includes.

It’s largely a question of personal taste and balance. Personally, I like the balance the developers have struck with this one. (Except for the optional typewriter sound effects – ugh. Luckily they’re switched off by default.)

Even some of the stuff that’s been left out of the user-facing prefs panel is available to those of you prepared to do a bit of typing in a Terminal window. A handful of advanced preferences and custom colors are available, as well as access to a cwp Terminal command for direct access to the application from the command line. See the bottom half of the app’s home page for more details.

There’s a live word and character count (told you it was aimed at writers), but no WriteRoom-style “typewriter mode.” It comes with built-in Markdown support, including a live-updating preview window and a handy “Copy Markdown-to-HTML” keyboard shortcut. 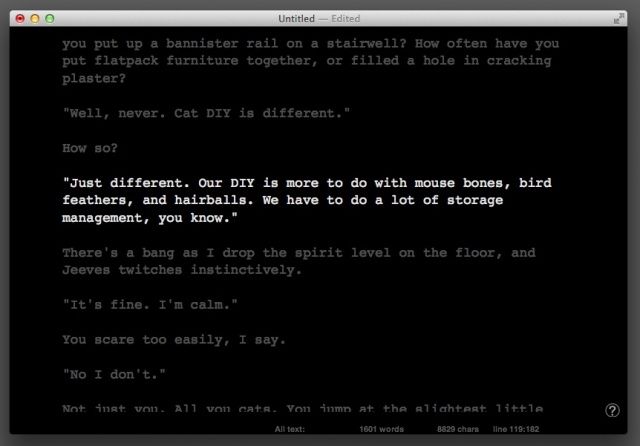 There are one or two very minor bugs – for example, controls left in odd places when you resize the preview window – but Clean Writer Pro is a basic app, and on the whole it gets the basics right. Quite a lot of basic apps fail to jump that simple hurdle.

Clean Writer Pro is fast, lightweight and at this price, a bit of a bargain. If you’re a text editor connoisseur, go grab yourself a copy now before the price goes back up to its normal level (which I think will be about six dollars).