One of the improvements Apple made to Safari 6.0 was to take the search and address bars and roll them into one — just like a lot of popular web browsers do. The change hasn’t been made to the mobile Safari app, though, which is puzzling, because it’s a more efficient use of screen space on a smaller display.

But there is a good reason for that omission.

Open up mobile Safari on your iPhone, iPad, or iPad touch, and tap on the address bar. Then hit cancel and tap on the search bar. You’ll notice that the keyboard changes slightly depending on which bar you’re using.

With the search bar, you get a spacebar at the bottom of the keyboard, but with the address bar you get a period, a forward slash, and a ‘.com’ button. The first makes it easy to search using more than one word, while the second makes it quicker and easier to enter URLs — without switching between different keyboards manually.

This is why Apple hasn’t unified the search and address bars in mobile Safari.

Some third-party browsers extend the keyboard. Google Chrome, for example, leaves the spacebar at the bottom of the keyboard, but provides you with other buttons in an extra row across the top of the keyboard. 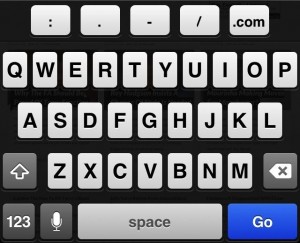 So why doesn’t Apple do this with Safari? Well, it looks nasty — especially on older iOS devices which have smaller displays. And as we know, Apple’s not going to add something that looks nasty. It never extends the virtual keyboard, in any app, so it’s not going to make an exception for mobile Safari.

With that said, you probably won’t see a unified address bar in mobile Safari for quite some time.