When the iPhone originally launched in 2007, AT&T was shocked by how much data users consumed and it crippled their networks. Once 3G was added to the iPhone, data consumption predictably increased, but now that we’re on the cusps of seeing an LTE iPhone 5, one analyst firm is predicting the iPhone 5 will double data consumption.

Validas, an analysts firm in mobile intelligence, has been tracking mobile usage data of hundreds of thousands of smartphone users in real-time. In a recent study, Validas tracked iPhone data usage of 150,000 users from January to August 2012 and found that iPhone users consumed an average of 489MB of data a month.

During that same timeframe, Validas tracked HTC Thunderbolt LTE users’s data usage and found that they were using an average of 1.022GB of data a month. Nearly double that of iPhone users. Their survey concluded that the addition of LTE in the iPhone will increase iOS data consumption to more than 1.2

The correlation of data Validas found isn’t necessarily a huge shocker, but it does support the idea that iPhone 5 users should expect to pay more on their monthly data plans once streaming videos, music, and photos becomes much quicker over LTE. 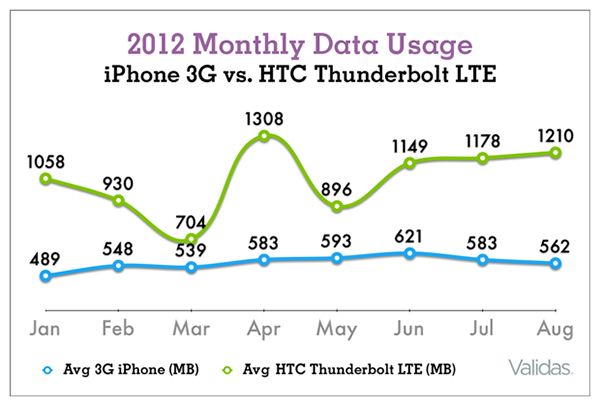